Gem of the Ocean 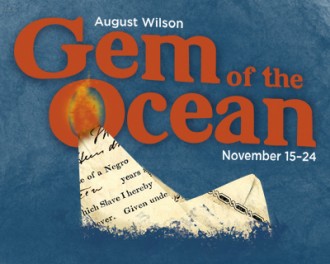 “...a mountain of a play, epic from the opening seconds...” - Washington Post

Gem of the Ocean is the ninth work in August Wilson's ten-play cycle recording the American Black experience. Set in 1904, the play begins on the eve of Aunt Esther's 287th birthday. When Citizen Barlow comes to her home seeking asylum, she sets him off on a spiritual journey to the mythical “City of Bones”, via the slave ship Gem of the Ocean. A powerful story of holding on to your ancestry in order to forge your future, Gem of the Ocean is truly a masterpiece.

Recommended for mature audiences. Patrons under the age of 8 will not be admitted, including babes in arms.

“How To Be An Antiracist”

We are honored to have Mr. Kendi in attendance for the opening night performance of Gem of the Ocean. Join him following the performance in the theatre for a conversation about the play.

Presented by the WMU Center for the Humanities and in conjunction with Black Refractions: Highlights from The Studio Museum in Harlem, on display at the Kalamazoo Institute of Arts - Sept 14 -Dec 8.