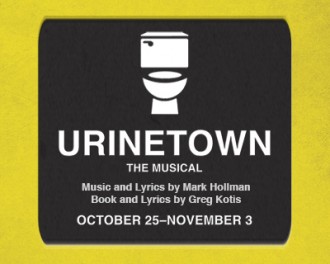 "A sharp satire of the musical form... Every line in the book and lyrics screams 'comedy.'" – Boston Globe

Winner of three Tony Awards, Urinetown is hilariously funny and touchingly honest, with its outrageous perspective, and sustained ability to produce gales of unbridled laughter. Urinetown has been fraught with a terrible water shortage, leading to a government-enforced ban on private toilets. The citizens are forced to use public amenities regulated by a single malevolent company that profits by charging admission for humanity’s most basic need. A hero decides that he's had enough and plans a revolution to lead them all to freedom!

Recommended for mature audiences. Patrons under the age of 10 will not be admitted, including babes in arms.