When students recall their experiences with Dr. Tom Carey, professor of management, many things come to mind: great stories that illustrate key business concepts, straight talk about industry and life, humor, and a passion for teaching that has only grown stronger throughout his 48 years at WMU. This year, Carey is retiring, and though he will not be in the classroom every day, his dedicated service to the college has laid the groundwork for what the Haworth College of Business is today. 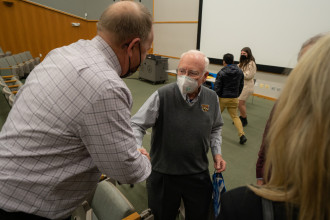 Teaching more than 20 different courses throughout his career at both the undergraduate and graduate levels, Carey has instructed more than 20,000 WMU Haworth students, many of them in introductory business courses—courses that are often critical to whether an undergraduate student continues as a business major.

Recognized with both college and university teaching awards, Carey continuously evolved his course materials each semester. “Normally, I would be updating my courses for fall now, looking for new business cases and revising projects so they were fresh, and it feels odd not to be doing that” says Carey. “I am going to miss being in the classroom so much. I have loved teaching at WMU.”

Colleagues cite Carey’s incredible, long-term service to the college and University as shaping many of WMU’s competitive advantages. “Not only was Tom an amazing teacher, but also a great colleague, mentor and a friend,” says Satish Deshpande, dean of the Haworth College of Business. “If I ever needed someone to help me brainstorm ideas or had questions about anything, Tom was there. He led the Department of Management during some difficult times. As a leader he was open, honest and diplomatic in handling sensitive issues. A forever optimist and a great storyteller, he will be missed by both students and faculty.”

In the Haworth College of Business, Carey has been instrumental in managing the academic offerings as chair of the curriculum committee, a member of the undergraduate program council, and an active member in the AACSB International accreditation process. As the chair of the Department of Management from 2001 to 2009, he worked with fellow chairs and deans to discuss issues critical to the success of the college and partnered with WMU senior leadership to ensure that WMU Haworth provided a vibrant, relevant education, using real business examples and immersive projects to prepare students for the workforce.

One of the key roles Carey played was that of a Capital Campaign Committee member and faculty liaison on the College Building Committee when Schneider Hall and the Fetzer Center were built. Carey’s role was to aid in creating a state-of-the-art facility that simulated a corporate environment—a space where students could practice their skills in realistic business settings and also have comprehensive services all in one building. The Haworth College of Business, dedicated in 1991, provided—and continues to provide—just that. 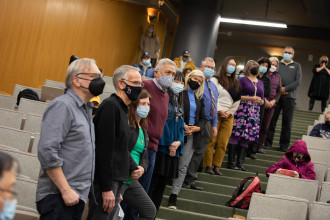 A member of more than 15 University-wide committees throughout his career, Carey worked collaboratively on WMU organizational structure, student retention, academic program review, budget, tuition, course scheduling and size, sabbaticals, graduate student awards and fellowships, and mentorship programming, among others. An active member of the WMU Faculty Senate, he served as a senator for almost a decade. During his time as a senator, the WMU School of Nursing was established. He served as secretary for the Faculty Senate, as well.

“I always tried to move WMU forward and give an honest assessment of our strengths and where we could improve,” says Carey. “I enjoyed working with my colleagues to find solutions to our challenges. The talent at WMU is tremendous, and I was serious about doing my part to enable all faculty and staff to move key initiatives forward—initiatives that would serve our students’ needs.”

His professional service is just as robust as his service to WMU. Contributing as a reviewer, board member and speaker, he was active in the Academy of Management, Institute of Behavioral and Applied Management and National Management Association, among many others.

Carey is also a veteran who served as a Captain in the U.S. Army from 1969 to 1972, where he was an Airborne Infantry Officer, Platoon Leader, Executive Officer, Company Commander, Assistant Brigade Adjutant and Brigade Adjutant. He was awarded the Army Commendation Medal in 1972.

“Dr. Tom Carey's sterling reputation as a caring, enthusiastic professor who invested his time and talent in his students and their future success is truly unmatched,” says Major General Rod Faulk, B.B.A.’87. “His stimulating lectures and thought-provoking questions, combined with his boundless energy and charisma, made him the stuff of legend on campus. His engaging style and sense of humor entertained his students while imparting lasting knowledge and wisdom, creating a very robust learning environment. Dr. Carey was well known for his support for Army ROTC on campus, and WMU cadets had no better champion. Tom's legacy at WMU is etched on his students’ lives forever—and the same could be said for every WMU ROTC cadet.”

Faulk recalls that though Carey was “larger than life” he also interacted with his students on a human and personal level. “I recall a lecture where Dr. Carey noted that a friend and I were ROTC cadets, and wove us into his lectures, contrasting leadership and management norms of corporate and military settings. He did so with humor, which made the lecture come alive for the class. Years later when I returned to campus, Dr. Carey had not changed—he was every bit as inspiring in his love for WMU and students.”

Joy and humility have been the constants for Carey in his career. “I am among many great teachers at WMU Haworth. Coming to work with such a dedicated group of faculty members was always fun. And the staff is second to none—every office has incredibly knowledgeable and committed staff members. I felt very fortunate to spend my career is such a setting. There’s the phrase, ‘If you love what you do, you’ll never work another day in your life,’ and it’s true—every day at WMU has been a gift.”