The Haworth College of Business family is comprised of extraordinary alumni—ones whose lives were impacted by something positive that took place at Western Michigan University. For Michael Howell, B.B.A.’73, that something just happened to be a bit of encouragement from Dr. Gale Newell, retired professor of accountancy.

It was Newell’s mentorship that led Howell to pursue a degree in accountancy, which changed the trajectory of his life. Now a serial entrepreneur and CEO of Harmony Dental Partners—a company that owns and operates family dental practices in Arizona—Howell credits Newell for positioning him on the path to success. But, as is typical of most success stories, that path wasn’t exactly a straight one.

An accomplished French horn player, Howell started college as a music major at Northern Michigan University. In 1967, his plans were put on hold when he was drafted during the height of the Vietnam War. He served four years with the U.S. Army in Southeast Asia, Europe and Japan before returning to the states.

“I wanted to play college football and was recruited by several universities before choosing Western,” Howell says. Sadly, his football playing days were cut short by a career-ending injury. Nevertheless, he continued his education, deciding on a degree in business.

Howell excelled in his introductory business courses and had originally planned to pursue marketing as a major. “I had never thought of myself as an accountant because I wasn’t very good at math, but I did very well in my first accounting class,” he says. “I had this young professor named Gale Newell, and I really liked him because he used real-life examples. Accounting is very abstract, and Dr. Newell had a knack for explaining the concepts very clearly.” 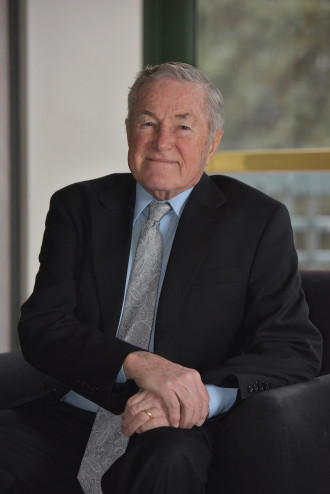 Newell’s teaching made accounting “click” for Howell, but his words would go far beyond instruction in the discipline. “He said to me one day, ‘Michael, you have a gift,’” Howell says. “No one in my life had ever told me that.” Newell then proceeded to ask Howell if he had ever considered a degree in accountancy.

“I wanted to be an entrepreneur all my life, and Dr. Newell helped me see how critical accounting and finance are to business,” Howell says. “Not only did he tell me I was gifted at something, he drew out a path for me to achieve my vision.” Howell went on to build a national automotive company and was part of a team that developed the first laser in the history of dentistry.

Today, Howell dedicates much of his life to assisting the underserved. He founded a national mobile dental company, ReachOut Healthcare America, with the mission of providing dental care to the U.S. armed forces, as well as children and seniors in need. This legacy program provides dental care in over 9,000 locations in the U.S. In addition to running his dental company, Howell is on the board of directors for Catholic Charities Community Services of Phoenix, which aids more than 20,000 individuals from vulnerable populations each year. He also volunteers through a variety of national programs.

Howell’s commitment to service, in addition to the influence Newell had on his life, led him to establish the Michael P. Howell and Dr. Gale Newell Accounting Scholars Fund at WMU. The endowed fund, awarding $100,000 over five years, supports both undergraduate and graduate students, as well as tutoring in accountancy. It is intended to help students who have faced socioeconomic challenges earn degrees and enter careers in the field.

“One thing Dr. Newell taught me is how pivotal it is for students to have a mentor or advocate,” Howell says. “My hope is that this scholarship will help a larger percentage of hard-working students from a variety of backgrounds graduate with degrees in accountancy from WMU.”

“Discussing future plans and opportunities with students outside the classroom is one of the most important, rewarding and enjoyable aspects of being a professor. Michael is an example of an excellent student who went on to great success in his career.”—Dr. Gale Newell