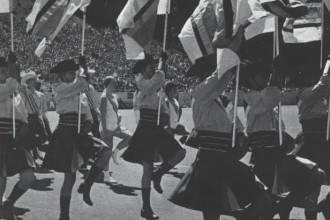 In 1973, Richard Swinsick directed the Western Michigan University marching band. He added a flag corps to the band, using them to add color, movement and excitement to the band’s shows. A new marching style emerged, fashioned after drum and bugle corps style, which placed the focus on precision drill marching rather than the formation marching the band had previously used. Rehearsals were now held four days each week, a tradition that continues today.

Changes continued in 1975 with new uniforms consisting of a gold shirt, brown pants, and white cowboy hat. With the corps style being used on the field at this time, the trombonists used valved trombones! 1977 brought Mr. Michael Williamson as the new director and a one-show season. The following year, Mr. Gregory Talford took over as director and eliminated the one-show season. In doing so, he expanded the show presentation to address both sides of the stadium. This season also marked the first female drum majors. In Mr. Talford’s years, the band became known as the Bronco Marching Band, a title proudly carried today. During this time, the “Bronco Cheer” began, a drum cheer that is still used today. 1982 brought the opening of the new music building, the Dorothy U. Dalton Center. The band marched around the building during the building’s opening festivities. 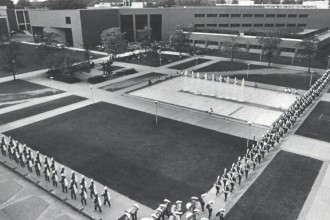 The band marches around Dalton Center in 1982 in celebration of the building’s opening.

Continuing the corps style under the direction of Mr. Jim Wright, the Bronco Marching Band traveled to the Marching Bands of America Grand National Championships in Indianapolis in 1985 to perform an exhibition at the conclusion of the preliminary championships. During Mr. Wright’s years, band membership exceeded 220 members and the band became known as “The Sound of Western.” Band travel continued under Mr. Patrick Dunnigan including performances at Game 5 of the American League Championship Series at Tiger Stadium and at the California Bowl in 1987 and 1988.

Mr. Stephen Grugin took over as director of the band in 1991. In 1995, band membership reached 250 members. 1995 also saw the band celebrate its 75th anniversary and the formation of the WMU Band Alumni Society. A non-partisan group, the Bronco Marching Band played for both President Bill Clinton and Presidential Candidate Bob Dole while each campaigned in the Kalamazoo area in 1996. An error by a television station at this time resulted in the band being heard playing the fight song across the nation! 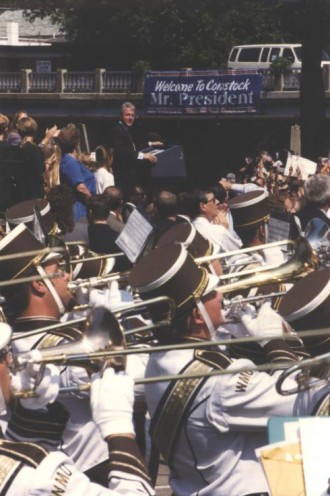 The band performs for President Clinton in 1996.

The band celebrates its 75th anniversary with alumni in 1995.

From 1998 until 2004, under the direction of William Pease, the Bronco Marching Band underwent many important changes that remain in effect today.

The Bronco Marching Band, under the direction of David Montgomery, performed in their first international appearance at the International Bowl in Toronto, Canada in January 2007. A sad time for the band, past Director of Bands, Mr. Leonard Meretta passed away July 23, 2007. The Bronco Marching Band honored him at High School Band Day in September of 2007, a tradition he began, by spelling his initials on the field. In 2008, the band received new uniforms, which were reprints of the past design. The band also performed in Houston at the Texas Bowl on December 30, 2008. This marked the fourth bowl game in school history and the band was honored to perform at the game. The Bronco Marching Band is continuing its tradition of excellence today.

Below, at High School Band Day in 2007, the band spells out “LM” to honor past Director of Bands, Leonard Meretta. 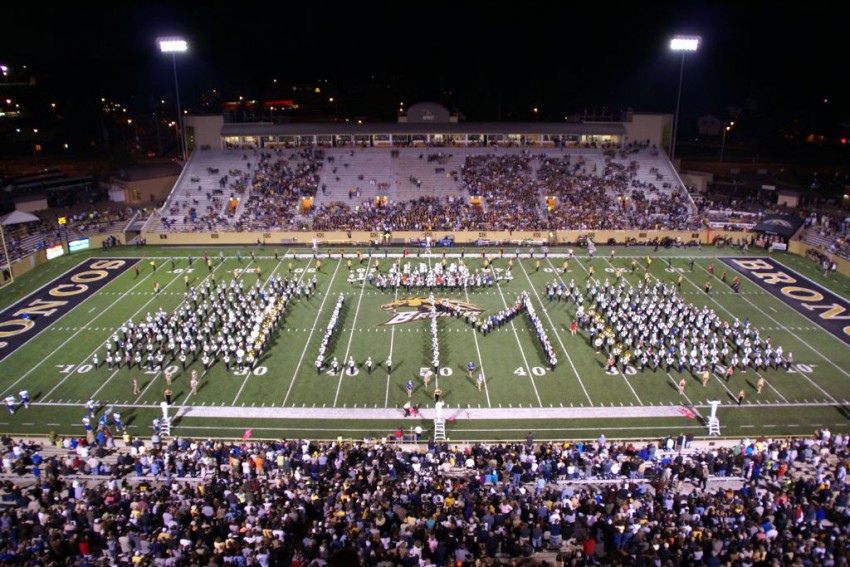