The Bronco Marching Band, as it is now known, began in 1915. In the beginning years only men were allowed to join and the band struggled to form from 1915 to 1917, playing mostly seated concerts with at most 20 members. Surprisingly, the first woman allowed in the band was in 1916. Miss Lucile Struble, trombone soloist, was granted admittance to the “hitherto strictly men’s organization…because of her exceptional ability in handling the slide,” reported the Western Herald on October 25, 1916. In 1917, the band was temporarily suspended due to members leaving for war service. The band was not listed as a student organization again until 1920.Recruitment efforts in 1920 and 1921 by Director Virgil Altenburg resulted in the formation of a band that would consistently perform and grow in size to the band we have today. 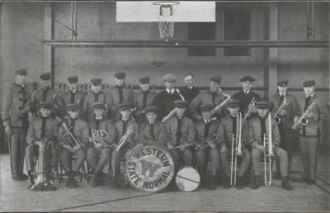 In the first public appearance of the newly formed group, the band was comprised of 20 members who did not have any sort of uniforms. Through student contributions, the band soon acquired uniforms consisting of caps, coats, and trousers. During the first year, the band performed at every athletic contest, resulting in positive support from the students and faculty at Western State Normal School.

In 1921, a band of 32 performed at athletic contests and community events and at its first away game at Albion. The members became known as “Band Boys” later this year. During 1921, the fight song, titled “Western’s Fight Song” (also referred to as “Hail, Hail for Western Normal School”) was introduced along with the alma mater “Brown and Gold.” In January of 1923, the Student Council helped the band to fundraise for new uniforms by laying the old ones to rest. Together, they raised $500 of the $600 needed for new uniforms in just two minutes time! The new uniforms arrived in February to fans’ delight as the band appeared in brown coats with capes and gold trimming. In the early years of the band’s development, the Student Council endlessly supported the band, often helping the band to purchase new instruments and uniforms. 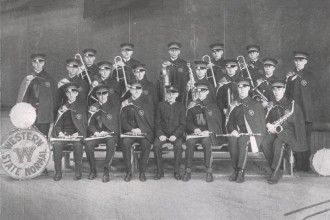 The spirited 1923 marching band clad in their uniforms complete with capes.

In the fourth year of the band’s formation, the band added a drum major to their personnel. At this time, one in every fifteen students enrolled Western State Normal School was a band member! Again in 1923, the band performed at Albion, this time on Thanksgiving. Though the game was a disaster for the football team, the band paraded the streets of Albion after the game. Despite the downpour of rain, the band inspired the Western rooters for the games ahead.

The 40-member band performed their first “long distance” trip at Michigan State College (now Michigan State University) for a basketball game in 1925 under the direction of Mr. George E. Amos. Also in 1925, the school named the band a permanent organization, later describing the band as “one of the college’s greatest institutions.” From 1926 to 1930 the band continued to perform on the gridiron and in concerts, and the Student Council continued to buy uniforms for the growing organization. In 1929, band members even participated on an intramural basketball team, though their record of 2-8 was not so hot.

By 1931, the band numbered 85 men, the largest thus far, and was known as the “Hilltop Band.” The nickname “Hilltoppers” came from Western’s nickname due to the fact that the campus buildings were seated on top of a hill. In 1934, the band rehearsed twice a week, adding a military color guard and two herald trumpeters. Then, in 1936, new uniforms were proposed for the band, being dark blue and gold because blue could be matched easier for re-orders. The dark blue proposal put students up in arms and the decision was reconsidered to keep the uniforms brown and gold. Those uniforms came in 1937. 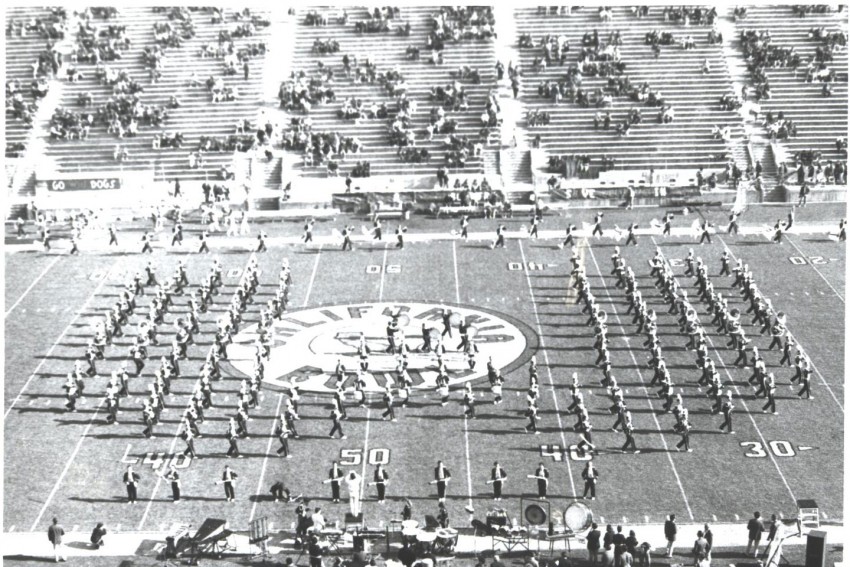 The band is beginning to be known for its “W” formation already in 1934.

The students at Western State Teacher’s College chose a new fight song in 1940 and the band’s repertoire thus changed. 1940 also brought the creation of Western’s first pep band of 20 members to play at basketball and baseball games. The debut of the first majorette came in 1940 too, with two more majorettes joining the next year. The band’s repertoire changed again in 1941 when Western State Teacher’s College became Western Michigan College and forced the rewriting of all school songs.

During World War II, the band was opened to men and women alike to fill its war depleted ranks. This practice began in 1941 when two women joined the ranks and was explained as a “matter of choice as well as of necessity.” The Western Herald reported that “in this case two isn’t a crowd.” Other reports by the Herald include one that asked, “Do you want to play in the marching band, sister? Well, now’s your chance because the Western Michigan Marching Band is in the market for coeds.” Later in the article director Amos commented, “The girls are doing a fine conscientious job and are helping to keep the band up to its high standards of former years. The band members are doing a better piece of work now, in both their marching and musically, than they were doing at the end of the football season last year.” This statement certainly spoke well for the women in the band. In 1943, the women actually outnumbered the men in the band!

In these days, the band was becoming known for its formation of letters, including the W for Western, a formation used to this day in every pregame routine. Other moves executed by the band include the “Mulberry bush” and the “Daddy.” In 1944, not recalling the protests over navy uniforms in 1936, the band acquired and wore new uniforms that had navy bell-bottom trousers instead of the brown and gold straight cuts. Fans, students, faculty, and band members alike all longed for the return of their brown and gold colors.