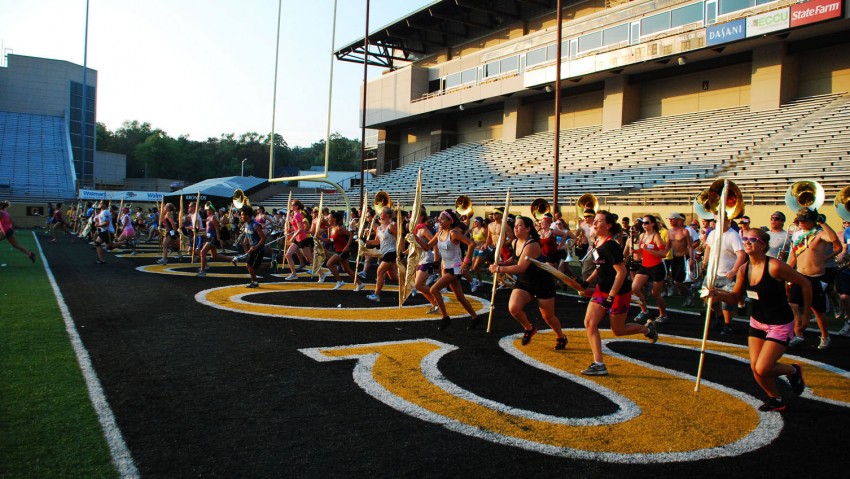 Western Michigan University's Bronco Marching Band welcomes new students each year. Many of the questions regarding participation in the marching band are answered below. If you need additional information, please contact the department.

What is the Bronco Marching Band all about?

The Bronco Marching Band is made up of over 300 motivated, hard-working students representing almost every discipline on campus.  We believe in excellence and family. The Bronco Marching Band performs at all WMU home football games as well as select away games, depending on the season. The band has always been a major part of WMU and the Kalamazoo area. Each year the band gets better and better. This is done with hours of practice, awesome student leadership, wonderful staff, and great direction from the director, Dr. Trey Harris. Even with all the hard work that each Bronco Marching Band member contributes, it’s still all about fun and supporting Western Michigan University.

I’ve heard that marching band takes up too much time. What is the commitment?

Actually, it takes up less time than you think. Band camp is the most intense, with rehearsals running from 8 a.m. until 9 p.m. It sounds hard, but this is when we get to know each other as well as get the hardest work done. Once classes begin our rehearsals are scheduled Monday through Friday, 4 to 5:40 p.m. We also rehearse at the same time on Friday of game weeks. Even so, many of our students also maintain part-time jobs and have greater than a 3.0 GPA.

When is Band Camp?

Band camp dates are generally the week before Fall semester classes begin. Check the website in late Spring for the exact dates.

Any student at WMU and other colleges in the Kalamazoo area are welcome in the Bronco Marching Band. Many people are surprised to hear that the majority (more than 75 percent) of our members are in majors other than music. In fact, one of our recent drum majors was a biology major!

I’m a Kalamazoo Valley Community College student but am interested in being in the Bronco Marching Band. How can I join?

The Bronco Marching Band welcomes students from Kalamazoo Valley Community College and other regional colleges to enroll and participate in the band. Enrollment as a guest student at WMU is required. We love having KVCC students in the band so be sure to get enrolled!

Enrolling as a guest student

I hear there are auditions. What are these like?

Horn Line auditions are held in the first few days of band camp and consist of scales and performing excerpts from our pre-game music. These auditions are evaluated by School of Music faculty and Bronco Marching Band staff. Music will be available in the summer.

So, what if I don’t make the band?

In most years 99 percent (if not all) of those auditioning make the band. The most competitive parts of the band are in our drumline and color guard sections. Due to the more specialized skills and demands required of these sections and limited amounts of equipment, there are times when not everyone auditioning makes the band. Our goal is to make sure that you have the skills to be successful in performing under the demands of what is expected of the Bronco Marching Band. The worst thing that can happen is you get to meet hundreds of other Broncos before classes begin and you get to move into your residence hall early!

Something this fun must cost money, right?

Your expenses will include the price of a one-credit class, t-shirt, wind suit, shorts, black marching shoes, and white cotton gloves—as well as meals during band camp. The Bronco Marching Band picks up the tab for the housing of dorm students only for the duration of Band Camp (the student will be charged per semester by Residence Life once school starts). Uniforms, music, and in some cases even instruments are provided. Items like Bronco Marching Band jackets and other souvenir items are optional. Band camp attendance in August is mandatory. The balance of your contribution will be hard work, dedication, and enthusiasm.

How do I get information about the season?

The BMB website is your best source of information. In addition, a newsletter will be mailed to all students enrolled in the course in late July with specific information regarding band camp and the upcoming season. This newsletter will also contain a confirmation form which lets us know of your intent to be in the Bronco Marching Band and reserves your space at band camp. Please complete the confirmation form and return it on the due date.

Marching band is a one-credit course offered through the university. Attendance at all rehearsals and performances until the end of the fall semester is required.

How long is a season for the Bronco Marching Band?

The season begins with band camp and extends through the end of the first of the semester including potential bowl games.

I have more questions about Band, how can I find out more?

First, when you register for fall classes at WMU, include Marching Band, listed under “MUS 1090,” as one of your classes. Then, get ready for the time of your life beginning in August, with the Bronco Marching Band pre-season camp.