WMU student one of 50 honored by national advertising organization 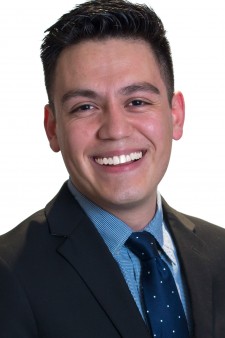 KALAMAZOO, Mich.—A Western Michigan University advertising and promotion student is one of only 50 students nationwide selected by the American Advertising Federation to participate in the organization’s Most Promising Multicultural Students Program for 2016.

Carlos Pinon, of Coldwater, is the recipient of the annual, nationwide award for college seniors with both exceptional academic and professional achievements. Pinon is the first student from WMU to receive this recognition and will represent the University at the program in New York City in February.

“To be named one of AAF's most promising multicultural students means so much to me not only because of all the hard work I have put in to be where I am today in regards to academics, but also because I am a first generation college graduate in my family and will have an honor such as this one,” says Pinon.

Pinon is active on campus, participating in WMU AdClub, and the Pi Kappa Alpha fraternity, of which he is a founding member. He is also a member of the National Student Advertising Competition team, and will represent WMU at the spring competition. Pinon has completed internships at Biddy Murphy, Tilt.com and Things Ta Do and was most recently a digital marketing strategist intern with Turnkey Merchandise Programs.

Pinon was nominated by Dr. Karen Lancendorfer, associate professor of marketing and director of the WMU advertising and promotion program.

"The Haworth College of Business gives students multiple networking opportunities that can have a huge impact on your success," says Pinon. "For me personally that means being involved in AdClub and having a professor like Dr. Lancendorfer, who truly cares about her students."

"Carlos is a perfect example of the business-focused advertising and promotion major at Western Michigan University," says Lancendorfer. "He understands both the creative and business elements of advertising and possesses the passion and drive necessary to succeed in the industry."

The American Advertising Federation, the nation's oldest national advertising trade association and the only association representing all facets of the advertising industry, is headquartered in Washington, D.C. The AAF's membership is comprised of nearly 100 blue chip corporate members comprising the nation’s leading advertisers, advertising agencies and media companies; a national network of nearly 200 local federations, representing 40,000 advertising professionals, located in ad communities across the country; and more than 200 AAF college chapters, with more than 6,500 student members. The AAF operates a host of programs and initiatives including the Advertising Hall of Fame, the American Advertising Awards, the National Student Advertising Competition, the Mosaic Center on Multiculturalism and summer advertising camps for high school students in Chicago, New York City and Washington, D.C.

About the advertising and promotion program

The advertising and promotion major at WMU attracts creative, strategically minded students and provides them with an interactive education that ensures they will have the skills and knowledge necessary for success. Advertising and promotion faculty bring years of practical experience to the classroom and maintain close ties with industry through applied research and consulting. WMU students excel in national student advertising competitions, including the EdVenture Partners National Case Study Competition where students regularly take top 10 national honors.

For more information about the program, contact Dr. Karen Lancendorfer at (269) 387-5996 or karen.lancendorfer@wmich.edu.