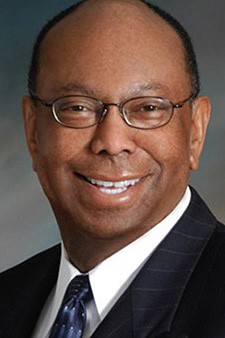 KALAMAZOO, Mich.—Dr. William Pickard, B.S.'64, an entrepreneur, an executive of several organizations and a recently appointed WMU trustee, will be the first speaker in Western Michigan University's 2016-17 Distinguished Speaker Series.

Pickard will speak at 2 p.m., Thursday, Oct. 6, at the Haworth College of Business in 2000 Schneider Hall. His presentation, titled "The 7 Principles of Entrepreneurship," is free and open to the public. It will be followed by a question-and-answer period.

To RSVP and request parking information, contact Cyntia Dawson at cyntia.dawson@wmich.edu or (269) 387-5069. Free parking is available near Schneider Hall.

Pickard is the chairman of the Global Automotive Alliance, co-managing partner of the MGM Grand Detroit Casino, CEO of the Bearwood Management Co. and the co-owner of five black-owned newspapers.

His 35-year entrepreneurial career began as a McDonald's franchisee in Detroit. In 1989, he founded an automotive manufacturing company and grew it into the Global Automotive Alliance, a group of logistics and manufacturing companies with more than one-half billion dollars in sales and eight plants in the U.S. and Canada.

In 2001, Pickard was named Michiganian of the Year for his business success, civic leadership and philanthropy. He was appointed in 1982 by President Ronald Reagan to serve as the first chairman of the African Development Foundation. Under President George H.W. Bush, he was appointed in 1990 to the National Advisory Committee on Trade Policy Negotiations and in 1991 to the Federal Home Loan Bank of Indianapolis board. Michigan Gov. Rick Snyder appointed Pickard to the WMU Board of Trustees in June 2016.