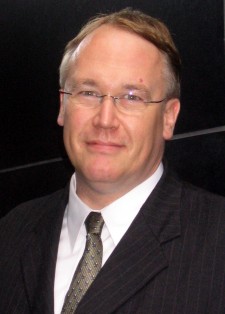 KALAMAZOO, Mich.—The Kalamazoo Symphony Orchestra’s 100th anniversary and strategic plan will be the focus at the upcoming Mercantile Bank of Michigan Breakfast Speaker Series hosted by the Haworth College of Business.

The event is free and open to the public and begins with breakfast at 7:30 a.m. Reservations are required and can be made by calling (269) 387-6059 or at wmich.edu/business/mercantile-rsvp. Free parking is available in Fetzer Center Lot 72F.

Founded in 1921, the Kalamazoo Symphony Orchestra is the third largest professional orchestra in Michigan. With a $2.5 million operating budget, it is recognized throughout the country as a regional orchestra of excellence. The symphony’s 97th season is focused on embracing diversity and change, and features exciting programming selections and world-renowned guest artists.

During the season, the symphony also will welcome five music director candidates to the podium. Daniel Brier currently serves as resident conductor and interim music director.

Gistelinck joined the Kalamazoo Symphony Orchestra in May of 2014. Prior to coming to Kalamazoo, he served as the executive director of the Chamber Orchestra of Philadelphia from 2006 to 2014.

A native of Belgium, he had previously served as the director of sales and marketing and co-artistic director for the Brussels Philharmonic Orchestra and the Flemish Radio Choir in Brussels.

As a graduate of State University of Ghent, Belgium, Gistelinck earned a master’s degree in musicology and bachelor’s degree in history of arts. Prior to earning his degrees, he graduated from the Royal Music Conservatory of Ghent.

The Haworth College of Business

Western Michigan University's Haworth College of Business, one of the largest schools of business in the United States, is the academic home to more than 3,500 undergraduate students majoring in 18 specialized areas of business. An additional 500 graduate students study business administration and accountancy.

The Haworth College of Business is among an elite group of fewer than 5 percent of business schools worldwide that are accredited at both the undergraduate and graduate levels by the AACSB International—The Association to Advance Collegiate Schools of Business. It is among a select 1 percent of business schools worldwide that have additional specialized AACSB accreditation for their accountancy programs.