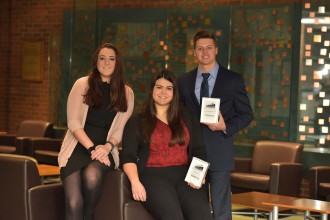 First-year student Ryan Demas of Naperville, Illinois, and junior Stacy Zoeller, of Portage, represented WMU. They were tasked with selling 3M VHB pressure sensitive adhesive tape to a washing machine manufacturer, role-playing for 15 minutes per round with groups representing different stakeholders. Demas earned a first-place finish in the first-year and sophomore division. Zoeller took second in the junior division and was a mere one-one hundredth of a point from first place.

Students were coached by a student coach, senior Marissa Bruno of Park Ridge, Illinois, and Dr. Kelley O'Reilly, associate professor of marketing. The students met three times per week for two-hour sessions for five weeks, doing research, practicing role-plays and getting feedback on their presentation skills.

"The competition was an amazing experience," says Demas. "Since this is my first year at Western, I am still learning how to sell and how to enter a meeting. To get this sort of one-on-one sales coaching as a first-year student was incredible. I am glad I could repay my great coaches Dr. O’Reilly and Marissa by bringing home a trophy."

The competition is unique in that it focuses on beginning sales students or students interested in sales as a major. More than 35 universities participated in the competition.

"The competition helped me learn more about myself and my sales style," says Zoeller. "It was exciting to see our hard work pay off in the role-plays. With all of our practice, I felt prepared for whatever would  happen during the competition."

O'Reilly is proud of the team and individual standings, an improvement over last year’s performance.

“The competition was a chance to showcase the deep talent of the sales and business marketing program,” says O’Reilly. “That talent was highlighted in Ryan and Stacy, but also in the strong guidance that Marissa displayed as a student coach. Stacy and Ryan put so much effort into their preparation that after their first role-play in the competition, they said it felt ‘easy.’ This speaks to their level of talent and work ethic, since both are just beginning to explore sales. I could not be prouder. Watching Ryan, Stacy and Marissa shine under the pressure of competition, was an amazing experience.”

Student coach and seasoned competitor Bruno frames the experience as one of the best of her academic career. “Coaching this team has been one of the most rewarding experiences I have had at WMU,” she says. “Being able to be there every step of the way and watch Ryan and Stacy not only compete but win was incredible—the pride I felt in them was one of the best feelings in the world.”