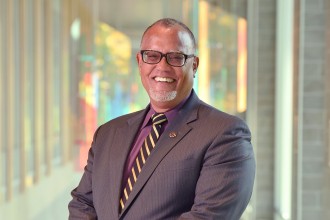 KALAMAZOO, Mich.—Western Michigan University President Edward Montgomery is the final speaker for this season's Mercantile Bank of Michigan Breakfast Speaker Series hosted by the Haworth College of Business at 8 a.m. Friday, May 18.

Montgomery will give a presentation titled "WMU: Higher Education at the Crossroads" in 1035 Fetzer Center.

The event is free and open to the public and begins with breakfast at 7:30 a.m. Reservations are required for this event and can be made by calling (269) 387-6059 or at wmich.edu/business/mercantile-rsvp. Free parking is available at Fetzer Center Lot 72F.

Montgomery became the ninth president of WMU on Aug. 1, 2017. He came to the University from Georgetown University, where he had served as dean and professor of economics at that university's McCourt School of Public Policy since 2010.

He earned a bachelor's degree in economics, with honors, from Pennsylvania State University and both master's and doctoral degrees in economics from Harvard University.

During a more than 35-year academic career, Montgomery has held faculty positions at Carnegie Mellon and Michigan State universities as well as the University of Maryland, During his tenure at Maryland, he served for six years—2003 to 2009—as dean of the College of Behavioral and Social Sciences.

During President William Clinton's administration, Montgomery served as chief economist, then counselor and assistant secretary for the Department of Labor, before being named deputy secretary of labor. In the latter role, the department's second highest position, he oversaw operations of a $33 billion federal department. During President Barack Obama's administration, Montgomery was a member of the president's auto task force and led the inter-agency White House Council for Auto Communities and Workers. That position put him in a role national media dubbed "the Auto Czar."

The Haworth College of Business is among an elite group of fewer than 5 percent of business schools worldwide that are accredited at both the undergraduate and graduate levels by the AACSB International—The Association to Advance Collegiate Schools of Business. It is among a select 1 percent of business schools worldwide that have additional specialized AACSB accreditation for their accounting programs.