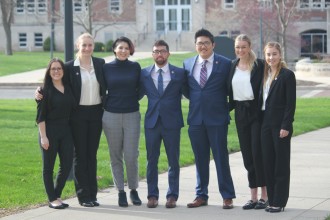 KALAMAZOO, Mich.—Two teams of marketing students from Western Michigan University's Haworth College of Business competed as finalists in the Center for Advancement of Digital Marketing and Analytics Social Media Competition at Ball State University, with one team placing second in a field of 50 university teams.

The competition held April 12 to 13 focused on the social media marketing dynamics of Sun King Brewing in Indiana. Teams were tasked with taking the company's social media strategy to the next level. Students crafted strategies that addressed the company's challenges with branding itself as committed to its products, employees and the Indiana community, while aiding customer acquisition. Each team produced a comprehensive, creative, data-driven social media strategy and a compelling presentation video in approximately seven weeks.

The finalist round of the competition included six teams, who presented live at Ball State University for social media professionals and finally to decision makers at Sun King Brewing.

"It is undeniably rare for a school to have two teams represented on a short national finalist list like this, but these teams were never satisfied with just being above average," says Dr. Scott Cowley, WMU assistant professor of marketing and team advisor. "They were there to win and had all of the necessary talent and dedication to compete at the highest level. Our prize-winning team did something that is very difficult for even the best teams. They cohesively agreed upon a riskier core strategy with bigger payoff potential. They allowed their personalities to shine through, and the judges loved what they heard. The reputation of our digital marketing program owes much to what these two teams just achieved in our first time competing in a national case competition."

The team approached the case in a creative and innovative way that differentiated it from fellow competitors. Members advocated that Sun King Brewing retain its personality while broadening its strategy. Specifically, the team recommended a new yoga-themed beer to integrate with the company's existing yoga events; members also suggested building a major beer release event and detailed the supporting social media and influencer activities that could be held in conjunction with the event.

"We were ecstatic to experience the competition alongside the other team from WMU that also made it to the finals," says Huang, team captain. "We owe a huge thank you to our wonderful coach and mentor Dr. Scott Cowley."

Huang's team was not initially one of the finalists, but it was the first alternate. When one of the teams was unable to participate, the WMU team was called on to compete less than a week before the competition.

"After a week of late nights, hard work and a lot of effort, we were ready to bring our A game," says Huang. "To place in the top three was quite unexpected but very thrilling. We could not have been prouder to represent Western Michigan University's Haworth College of Business."

Ashton Burke, Lauren de Vries and Ashley Mahler also competed in the national finals of the competition with a strong performance that earned accolades from the judges.