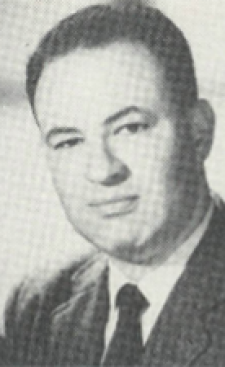 Dr. Klein began in the Department of Sociology at WMU but moved to Political Science in the 1960s. He promoted studies in Eastern Europe and advocated for the region as a scholarly destination. One of the only American intellectuals to do so, he worked exclusively in Yugoslavia. He organized and led many trips for students to Eastern Europe. From 1965-67, he established an exchange program between Yugoslavia and WMU that enabled faculty members to teach in the Balkan country through the US State of Department Exchange program. Yugoslavian scholars taught in various departments around campus.

He focused on Central Europe and the Soviet Union in his research leading him to be one of the top authorities on the area. He authored more than one hundred articles and reviews dealing with East Central Europe and the Cold War between the US and the communist countries. Considered an expert, Dr. Klein was the advisor for the George F. Kennen Institute in Washington D.C., the International Communications Agency, and the US Department of State. He also served as the academic chairman of the European Studies Committee at WMU.

During the peak of the Cold War, the press sought Dr. Klein’s opinions and expertise. When President Jimmy Carter campaigned for worldwide human rights, Dr. Klein adamantly believed it would fail in the Soviet Union because of the government’s oppressive tactics on their own people. “The Soviet Union is a gerontocracy– which means it is a system run by old people. It’s not a society that is known for its evolutionary change...” explained Dr. Klein to a Western Heraldreporter in 1978.

Prior to teaching at WMU, he had survived being a prisoner at Bergen-Belsen Concentration Camp and lived under a totalitarian regime in Eastern Europe. Grateful for his mother’s US citizenship, he came to America after World War II. He also served in the US Army from 1952-54. Taking advantage of the G.I. Bill, he received his B.A., M.A., and Ph.D. from the University of Illinois. His lectures and comments often reflected his worldly experiences and views.

His wife Dr. Patricia Klein, Professor Emerita of WMU Department of Sociology, set up the scholarship and a lecture series that annually brings in scholars to speak on campus.

The George Klein Scholarship in Central and East European Studies is awarded to a student who is planning to enroll in the WMU Study Abroad program in the Czech Republic or in Albania, Bulgaria, Croatia, Hungary, Kosovo, Macedonia, Montenegro, Poland, Romania, Serbia, Slovakia, and Slovenia