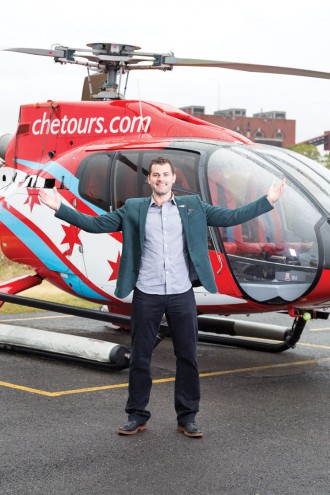 Often the best entrepreneurial ideas come from everyday experiences. Trevor Heffernan, B.B.A.’09, had just such an experience. Stuck in Chicago traffic trying to reach his family’s farm outside the city, Heffernan began thinking how nice it would be to bypass the gridlock and decided in that moment to become a pilot so he could do so. Investing in his own helicopter, he began flying for pleasure and taking friends and family on informal tours of the city to see its breathtaking views. And then he began to think, “there is a business opportunity here.”

Heffernan started to research and realized that Chicago did not have the helicopter tours that are popular with tourists and natives in other cities. He began visiting cities that offered such tours and studying the industry, knowing that this was a niche business perfect for Chicago. After several months of planning and working through a very complicated regulatory process, Heffernan’s business, The Chicago Helicopter Experience, took flight.

His staff, which includes several WMU alumni, now takes people on tours of  the city each day. They get to become a part of many special moments as they interact with people from all over the city, country and world who want to take a memorable tour.

“One of our most meaningful experiences was when we worked with the Make-A-Wish Foundation to help fulfill a four-year-old boy’s dream of becoming a super hero,” says Heffernan. “Eric arrived at the heliport dressed in his super hero costume, and our pilot, dressed as Superman, flew him over the city. When he landed at the heliport, a police convoy escorted him to Navy Pier where he battled bad guys and was awarded a commendation from the Chicago Police Department. Getting to be a part of Eric’s wish was one of the greatest experiences we as a company have had to date.”

With this unique business, Heffernan and his team get to be a part of everything from engagements to anniversaries to first-time family trips to Chicago.

As the only business of its kind in the city, Heffernan was charting new territory as he worked with municipalities to launch his business. “A big challenge has been navigating all of the governing entities and approvals needed to operate a business like this without having extensive background in the aviation industry,” he says.

And his advice for prospective entrepreneurs, “Be prepared to battle the world. That is what it takes to be successful and establish a business. You have to be willing to make a new business your life, at least initially.” 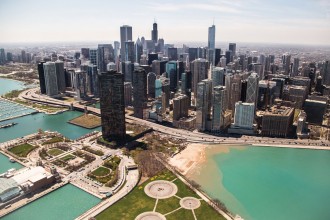 What’s next for this growing company? Heffernan plans to grow the business by continuing to improve and innovate the tour experience, and the company is moving into helicopter charters. They will be launching a helicopter shuttle service to O’Hare Airport in the near future as well.

“My goal is to utilize our facility and our technology to provide an experience that raises the bar in the helicopter tourism industry,” says Heffernan. “Long term, I want to establish the company as the premier helicopter company in the country.”

And each day, Heffernan gets to share magical views of a city he loves with others. “Our team supports the vision of where we want to go as a company, so from both the cockpit and the office, the view is stunning and unlimited.”