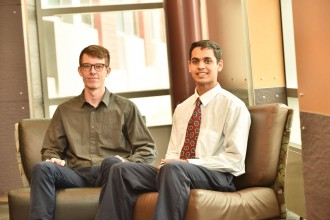 Recent WMU alumni Stephen John and Joseph Barnett are winning over everyone who has had the chance to learn about their life-saving invention, NeoVent.

The WMU duo teamed up to create NeoVent after John learned from a Respiratory Therapists Without Borders official about the need for a low-cost medical device that could deliver biphasic positive airway pressure ventilation to prevent lung collapse in premature babies experiencing respiratory distress in hospitals lacking the costly medical equipment that typically provides this life-saving therapy.

Babies born preterm sometimes have underdeveloped lungs and need some degree of respiratory life support. But, due to expense as well as the complexity of staff training and repairs, ventilation equipment commonly available in developing nations is not always readily available in medical centers in underserved parts of the world.

That is when the inventive minds of John and Barnett started turning, realizing that they could have a major impact by delivering this life-saving technology at a low cost. Both spent time abroad volunteering at hospitals—John in Nepal and Barnett in Honduras. Both planned careers as physicians and medical device developers. And both knew they could solve this problem.

Now, more than two and a half years into the development of NeoVent, the pair has a working prototype and a patent pending, and is working to start clinical studies in Nepal—a descriptive safety study in summer of 2016 with a randomized control trial later in the year. John and Barnett estimate that NeoVent will be priced at around $25 versus the thousands of dollars a ventilator costs. It is simple, energy efficient, and safe. Its purely mechanical design with only one moving part provides a much simpler way to perform the task of providing two levels of pressure for the infant. 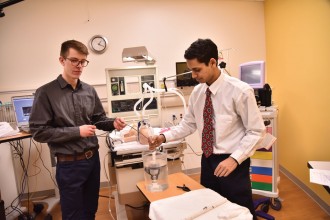 Getting here hasn’t been easy. The process has been a long one. John and Barnett began working on the device in John’s home. They then spent months refining it in Dr. Peter Gustafson’s lab in WMU’s College of Engineering and Applied Sciences.

“I am really excited. It’s so fulfilling to see our device reach this point from its humble beginnings in my basement,” John says. “We’re really grateful for the support we’ve received from Western as well as other individuals in the Kalamazoo community, such as Jim VanWeelden from Sigma Machine and Ed Bos from Worldwide Lab Improvement. We couldn’t have reached this point without them. All the support has brought us one step closer to our ultimate goal of saving neonatal lives.”

John and Barnett also spent months at Starting Gate, WMU’s student business accelerator, working on their business plan and putting that plan into motion. “Starting Gate was our first encounter with the business world,” says Barnett. “It provided us with an excellent introduction to fundamental concepts like the minimum viable product and customer discovery, which have been very helpful.” 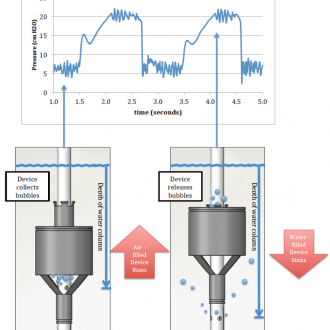 NeoVent delivers dual level treatment to babies in respiratory distress—something that has posed a challenge in low-resource settings. The device collects bubbles and rises and sinks delivering two levels of pressure to the infant, a high and a low. The waste bubble energy of current treatments is used to power the next level of treatments.

“Stephen and Joseph used Starting Gate as their think tank and achieved every milestone that they set out to accomplish,” says Lara Hobson, director of operations for Starting Gate. “This dedication, paired with the mission of their company and the viability of their product, is what has set their company apart as they have competed and sought funding for their business.”

Dr. Kay Palan, outgoing dean of the Haworth College of Business, echoes this. “Stephen and Joseph have demonstrated perfectly the essence of entrepreneurial thinking—the ability to use creativity, strategy, empathy and professional skills to embrace an important opportunity. We are very proud of their efforts and are excited to see NeoVent come to the marketplace and address a critical need.”

The global market for NeoVent is staggering, and John and Barnett have been and will be abroad quite often. Yet they have not lost their focus on Kalamazoo. “We’ve received so much help along our way from individuals in southwest Michigan—both from WMU and from the community. As a business, we want to give back, hopefully by creating jobs here while saving neonatal lives around the world.”