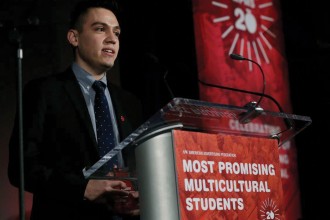 An advertising and promotion student is one of the American Advertising Federation’s Most Promising Multicultural Students for 2016 and was the first student from WMU to receive this recognition.

Carlos Pinon, B.B.A.’16, is one of only 50 recipients of the annual, nationwide award for college seniors with both exceptional academic and professional achievements. Nominated by Dr. Karen Lancendorfer, associate professor of marketing and director of the WMU advertising and promotion program, he represented the University at the program in New York City in February.

The one-week networking immersion program connects students with industry professionals. Participants in the program were exposed to top advertising agencies and participated in networking opportunities. Each day of the program also included a panel with representatives, including chief diversity officers from several agencies, who shared their insights on diversity and inclusion in the industry, how the industry has evolved and what is in store for the future.

“Embracing diversity is something my parents instilled in me at a young age, and WMU’s Haworth College of Business has given me so many opportunities to learn, grow and share my experiences,” says Pinon. “To be the first to represent WMU at such a prestigious event was amazing. I feel very honored.”

Pinon is active on campus, participating in WMU AdClub and the Pi Kappa Alpha fraternity, of which he is a founding member. He is also a member of WMU’s National Student Advertising Competition team. Pinon has completed internships at Biddy Murphy, Tilt.com, Things Ta Do and Turnkey Merchandise Programs. He will be working in account management at Leo Burnett upon graduation.