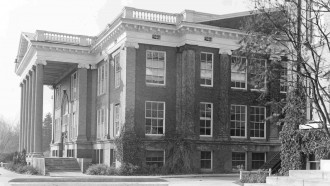 “When WMU’s college of business was located on East Campus, it clearly defined your identity as others knew you were part of the business program. I recall countless hours in the library preparing for exams along with other students. East Campus was a community for many as we lived in close proximity to avoid the long hike from main campus during the winter season!”
– Jeff Williams, B.B.A.’83, President, Europe, Middle East and Latin America, Johnson Controls

The college of business had homes in North Hall, West Hall, and East Hall throughout the years, eventually moving to Schneider Hall and officially being christened the Haworth College of Business in 1990, with a formal building dedication in 1991. 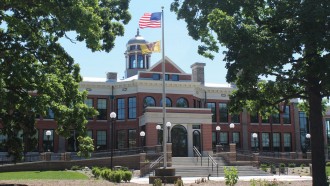 Heritage Hall was renovated in 2015 to become the University’s alumni center—it is a place where shared experiences are celebrated. The building offers several spaces available for events and museum-like displays recounting Western Michigan University’s history. The renovation, which was acknowledged with LEED Platinum status, has been lauded with a number of awards.

Raymond J. Rabidoux, B.B.A.’66, has been named president emeritus of Glacier Hills Senior Community in Ann Arbor, Michigan. Rabidoux served as president and CEO prior to his retirement.

Charles L. Itt, B.S.’74, has retired after 47 years in the retail industry. Itt spent 30 years of his career in the grocery industry and the final 17 in a management position with CVS Pharmacy.

Wayne D. Roberts, B.B.A.’90, was invited to edit the Michigan tax guide for the seventh time. The guide offers accounting professionals a general picture of the impact and pattern of Michigan taxes and provides a first-look reference for accountants.

Joseph P. Champine, B.B.A.’05, was named to the 30 in Their Thirties class of 2017 by DBusiness. Champine serves as executive vice president at Jones Lang LaSalle in Royal Oak, Michigan.

Bob Armbrister, B.B.A.’06, MBA’13, was honored by the Grand Rapids Business Journal as a member of their 40 Under Forty Business Leaders in 2017. Armbrister serves as president of SPARKS Business Works and chief information officer of CSM Group.

Nicholas A. Skislak, B.B.A.’06, received an award from Corp! Magazine, naming his company, SS Digital Media, as one of Michigan’s Economic Bright Spots. SSDM is a full-service digital marketing and advertising agency in Troy, Michigan.

Tamara D. Warren, B.B.A.’08, was named to an elite group of 24 individuals as a Michigan State University Class of 2018 Michigan Political Leadership Fellow.

Keely M. Martin, B.B.A.’09, has been promoted to corporate accounting manager at Horizon Global in Troy, Michigan. Martin resides in Dearborn, Michigan, with her husband Antonio and children Zeno and Eliana.

Lauren A. Kniebes, B.B.A.’13, was presented with the Young Business Leader of the Year Award by the Southwest Michigan Chamber of Commerce for her work as co-owner of Lazy Ballerina Winery in St. Joseph, Michigan.

Michael J. Bower, B.S.’12, B.B.A.’15, graduated from the U.S. Army Flight School at Fort Rucker, Alabama. Bower will begin his career flying the Army’s only fixed-wing aircraft, the C-12, during his assignment to South Korea in summer 2018. Bower also received a promotion to First Lieutenant in April 2018.

Keith W. Little, B.B.A.’17, was accepted into the WMU School of Public Affairs and Administration as a master’s degree candidate. Little currently serves as secretary of the Graduate Student Association’s Finance Allocation Committee.