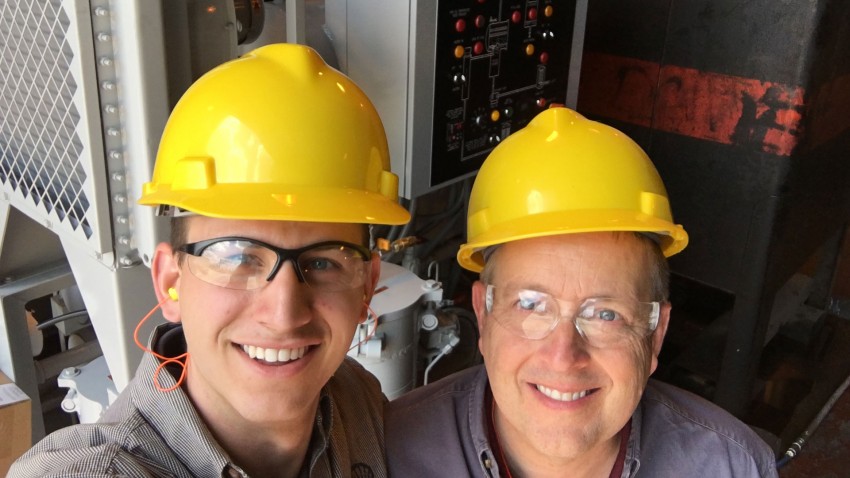 Spending every day working with a family member … for some, this sounds like a recipe for disaster, and for others, the opportunity of a lifetime. For Ryan Kohsel, B.B.A.’16, a family business was exactly what he wanted—coming to college with a plan to open a business with his father upon graduation.

After Kohsel’s father left his career with an oil distributorship, the two decided to open Next Generation Services LLC. The business focuses on the manufacturing industry and helping companies improve their machine reliability while simultaneously reducing costs and environmental impact.

The pair started with zero customers and has built the business from the ground up since June of 2016. Both started the business with their own strong skill sets that have helped the business grow and reach profitability within just one year—an enviable accomplishment.

Kohsel’s father had developed many relationships in the industry and gained valuable experience throughout his career about the potential market as well as customer needs and wants. That, paired with his sound chemistry background in the formulation and application of oils, set the father-son duo up for success.

Kohsel brought his own knowledge base to the table as he was finishing his management major. He made connections with a number of faculty members, including Dr. Matthew Ross, assistant professor of finance. The two met when Kohsel was forming his honors thesis, which he used as an opportunity to author the business plan for Next Generation. He went to Ross for feedback on the financial portion of the plan, and Ross found the plan so intriguing that he joined the thesis committee to provide further guidance.

“Ryan stands out in his ability to find resources and rapidly incorporate new information,” says Ross. “With a solid educational experience and support system, he and his father have Next Generation Services set up for growth. I am excited to follow their story as they work toward continued success.”

That educational background was critical for Kohsel feeling that he could take on the challenge of a startup.

“My education at WMU provided me with understanding in areas that were critical to my career as an aspiring entrepreneur,” says Kohsel. “I still have quite a bit to learn, but I have been able to master elements of my profession much faster with thorough understanding of a variety of business principles.”

To complement what he learned as a student, Kohsel’s experiences and relationship with his father are what really contributes to his current success. “Most employers will tell you that the single most important factor in hiring candidates is how well they fit in the organization. Although he was busy throughout my life, my father took time to be a dad. Experiences such as playing catch, taking vacations together or going to the ice rink all led to a healthy relationship with my family and a healthy working relationship. Without it, we would not be able to work together.”

While the two specialize in different areas, they share many roles. Kohsel handles the marketing side of the business, while his father is the primary point of contact for financing and banking relations–but he still brings his son along to meetings to learn the process. The pair shares the responsibilities of making sales calls, customer visits and performing the day-to-day work.

Though both Kohsels have been planning and dreaming for the day they would own a family business, there are also challenges. “When we come to a hurdle, we don’t lose our minds but understand that every problem has a solution. By working out problems, we can continue on and are better prepared for the next one,” says Kohsel.

When asked about his hopes for the future of Next Generation Services, Kohsel says he wants to grow the business to more than just him and his father, and he wants to grow his knowledge and abilities with it. “I look forward to the day when I am capable of running the business successfully with what I have learned from my father along the way.”

One of Kohsel’s greatest hopes for the business is for it to be a blessing to his community—a place where people seek out employment and enjoy going to work. “Creating a business is about more than just that industry, it’s about the overall impact.”