From FBI to Freelance 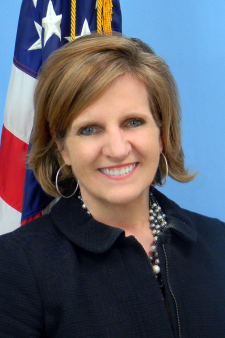 Jane Rhodes Wolfe, B.B.A.’81, has a full spectrum of experience. From investigating terrorism, high-profile white collar crime and international criminal networks, to working alongside first response efforts of a national tragedy, she has witnessed events far beyond what she could have ever imagined as a student at WMU.

The accountancy alumna started her career as a special agent for the Federal Bureau of Investigation in the New York field office, investigating financial fraud and terrorism violations. From 2004 until 2011, Rhodes Wolfe held leadership roles in Chicago, Washington, D.C., and Philadelphia. She served as supervisory special agent of a Joint Terrorism Task Force, assistant inspector and assistant special agent in charge.

In 2012, Rhodes Wolfe became a member of the Senior Executive Service in the FBI’s Counterterrorism Division. She led national programs dedicated to the disruption and prosecution of terrorists. During this assignment she specialized in the identification of threat financing networks and worked to proactively collaborate with the financial industry to defeat corrupt financial networks. In 2014, she assumed responsibility for the Exploitation Threat Section where she was responsible for threat reporting and mitigation, terrorism communication analysis and crisis management.

Rhodes Wolfe retired from the FBI in March 2016 and is now a consultant, providing her expertise in enterprise risk management issues, business development, security, crisis planning, and employee misconduct and litigation support to private sector and government clients.

Take a look behind the scenes at some experiences that stand out to Rhodes Wolfe as she reflects on her career in her own words.

Throughout my career at the FBI, I have been honored to have played a role in many significant terrorism investigations. While assigned to the FBI’s New York Field Office, I was a member of the FBI’s Evidence Response Team, where we responded to crime scenes both domestically and internationally.

In October of 2000, the USS Cole was bombed in the port of Aden in Yemen. The New York office responded and I deployed as a member of the ERT to lead the efforts in collecting evidence. Within hours of the attack, we traveled to Yemen on military aircraft, landing late at night under heavy security measures. Early the next morning, we began the arduous task of identifying and recovering the remains of the 17 victims and evidence of the attack.

For the next few weeks, our FBI team worked with the USS Cole sailors and other military members to complete our mission. During our time in Yemen, we were faced with security threats and a highly charged political environment. Together, as a team we were able to gather the remains of the sailors and collect evidence to aid in the investigation and identify those responsible. The bombing of the USS Cole was my first exposure to terrorism and little did I know what was to follow over the coming years.

On the morning of September 11, 2001, I was working in the FBI New York office and responded to the World Trade Center attack. Nearly all the special agents from our office headed towards the towers, located approximately eight blocks from our office. We worked to assist getting people out of the area to safety and began the investigation.

For the next two and half years I worked exclusively on the 9/11 attacks. I worked for months in New York, examining debris for evidence, human remains or personal property of victims. Later, I was transferred to Washington, D.C.

One of my roles on the D.C. team was to listen to and transcribe the 9-1-1 calls and radio transmissions of the responding police and fire personnel. Those calls and communications demonstrated great bravery, courage, strength, love and compassion. Many of the calls capture the final moments of the victims’ lives. When possible, we would meet with family members and share the recording or images we had of their family members. Those calls framed the human loss—both short and long term—for families and friends.

I had the great honor of meeting with New York City 9-1-1 operators and first responders who are dedicated professionals who performed their duties in an exemplary manner in the wake of a murderous terrorist attack. Their efforts helped to save lives and comfort others trapped in the buildings. I encourage everyone to appreciate first responders, 9-1-1 operators and emergency personnel who serve our country every day under what are often challenging and unforgiving conditions.

Between 2000 and 2016 I worked on more than 15 high-profile terrorism investigations. Each investigation highlighted the evil of terrorists and their desire to destroy our way of life. Over the years the threats have changed and now we are facing ISIS and home grown violence as they desire to continue attacks. I encourage everyone to educate themselves on the threats and look for ways to contribute to our national security.

The fundamentals of accounting and finance have been useful throughout my career at the FBI and in private industry. The ability to understand and communicate financial concepts have assisted me in conducting investigations or managing a large FBI business portfolio.

As a member of Alpha Kappa Psi while at WMU, I learned the necessity of networking. Although we didn’t call it networking back then, the concept of teamwork and shared goals is key to finding the right career, opportunities and fulfillment in your work. Find ways to network across multiple platforms, industries, generation and social circles.

The ability to communicate is the key to success in any endeavor. Students should not be shy in looking for connections or opportunities—aspects of accounting, finance, marketing or other business functions can be used in any organization. There are opportunities within your network of family, friends, classmates and strangers alike; you just need to let people know what you’re looking for and be open to new challenges.

I welcome the chance to help other Broncos—feel free to contact me. jrhodeswolfe@ermconsults.com