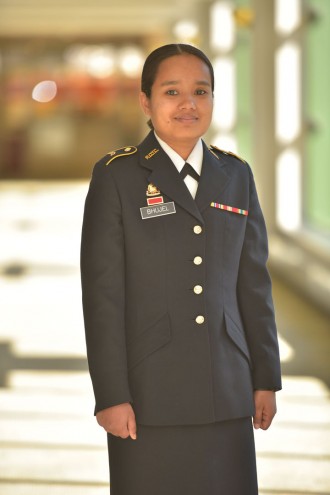 The power of gold at WMU is that students choose their own path. The opportunities on campus are abundant and achieving their goals gives students the ability to reach their dreams.

Junior Tika Bhujel is experiencing this firsthand, as an accountancy student and WMU ROTC cadet. As she takes campus and the world by storm, she’s defining her own goals and achieving them along the way.

A native of Bhutan, Bhujel’s family was forced to flee to Nepal in the early 1990s due to political riot and conflict. Her family was part of more than 10,600 Bhutanese leaving the country. Placed in a Bhutanese refugee camp with no electricity and limited access to food and water, Bhujel received her education in the camp. After 17 years, Bhujel, her parents and her three siblings were selected by the United Nations Refugee Agency and the International Organization for Migration to be settled in the United States. They landed in Lansing, Michigan, in 2009.

How did she get to WMU? After graduating from high school, Bhujel had goals she was ready to achieve, and WMU lined up with all of them.

“WMU is a great and military-friendly university,” says Bhujel, who became a U.S. citizen in 2014. “I also have always wanted to live with a roommate and explore all of the things on campus that were new to me. I wanted to get out of my comfort zone and experience various things on my own that were different than my culture.”

One of the main involvements Bhujel is currently engaged with on campus is the WMU ROTC program. She is learning the ropes and gaining new experiences that are contributing to many of the goals she hopes to accomplish while at WMU.

“Being part of the program has given me new skills that help me improve my leadership abilities,” she says. “I’m also improving and growing tremendously in terms of my physical fitness and academics.”

Her success in her classes is something she doesn’t take lightly. Being a role model and someone her family can look up to in regards to education is something that she takes great pride in.

“My parents and grandparents have never been to school and do not speak English. I am the first generation to go to college,” says Bhujel. “Doing well in my classes is a huge responsibility to me. I want to be an example for my nieces and nephews and make sure they know that they can come to me with questions about college.” 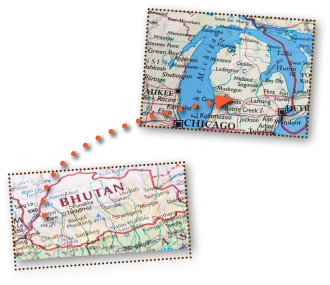 And Bhujel hasn’t stopped looking ahead. Next on her list?

When your determination is pure gold like Bhujel’s, nothing can stop you.