A future in finance 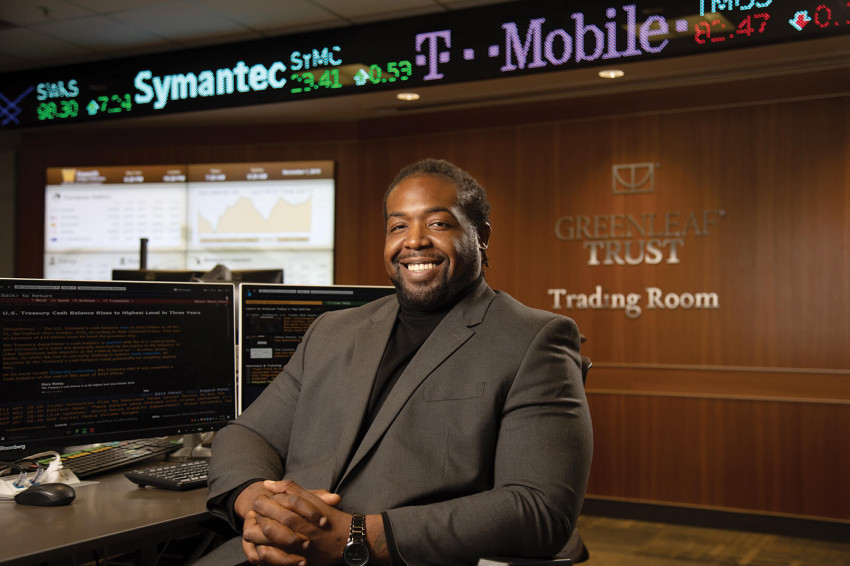 In the month of October, Eddie Warr wasn’t sleeping very much. He had just started a new full-time position as a wealth management assistant at Greenleaf Trust, while taking 15 credits toward his finance degree at Western Michigan University and raising his 4-year-old daughter, Cecilia. Top that with an earlier bout of appendicitis, emergency surgery and a few unexpected life changes, and it’s safe to say that Warr has mastered the art of perseverance.

“Free time” is not a phrase he is familiar with since enrolling at the Haworth College of Business—but Warr is not one to complain. On the contrary, he is quick to express gratitude for all he has been able to accomplish.

“I feel like I wasted some years, and I don’t have any more time to take the long way around,” Warr says. “I want to get where I want to be. I know there are going to be stumbles and falls, but if I can be proactive about the things I want to learn, it will come back tenfold.”

At 27, Warr has come a long way since beginning his educational journey. Growing up in foster homes and group homes throughout northern Indiana, he says he struggled with recognizing his own self-worth while also trying to care for his younger sister. As an adolescent and teenager, the only way he knew how to vent his frustrations was by acting out at school and the environments he was living in.

“I took the easy road, and it ended in trouble,” Warr says. “But then I began to look at the crowds I was hanging around, and something told me I was better than that. I wanted to make a change, and my motivation was my daughter—knowing that I didn’t want her to go through any of the negative experiences I had from not having parents.”

Coming to that realization was a turning point for Warr. He not only wanted to provide a good life for his daughter, he aspired to work in the financial industry and wanted to help others from similar backgrounds become financially stable. His ambitions led him to Grand Rapids Community College, where he earned an associate degree in accountancy before exploring four-year business schools.

“As I researched Western, I realized that the programs, especially in business, are top-notch,” Warr says. “When I found out the Haworth College of Business has its own career center, as well as other resources to help students, I knew this was a special place.” 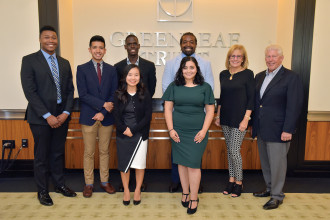 As a transfer student, Warr wanted to take advantage of every opportunity he could find at WMU. But, he didn’t always know which steps to take to apply for a scholarship or internship. “No one around me had gone to college, so I was doing something new,” Warr says. “It can be intimidating completing a FAFSA and other things when you don’t have support.”

He quickly found an ally in Bob Stewart, career development specialist at the Zhang Career Center. Warr says Stewart gave him the encouragement he needed to interview for a competitive Greenleaf Trust Scholarship. The award is for students from underrepresented ethnic backgrounds who wish to pursue degrees in finance or financial planning at WMU.

“For the longest time I felt like a failure. I had been turned down from so many opportunities, it was just drilled in my head to not even try,” Warr says. “It was Bob who said, ‘Eddie, look at everything you’ve done.’ He gave me the wind in my sails by empowering me and saying, ‘What’s the harm in trying?’”

That encouragement was the push Warr needed to interview for not only the scholarship, but an internship with Greenleaf Trust, which he landed as well. The deeply engaging experience allowed Warr to rotate through four divisions at the company: personal trust wealth management, operations, research and retirement planning. 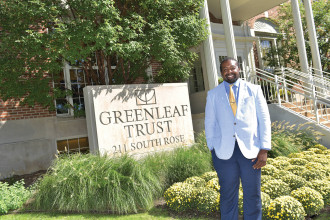 “The internship was such a boost to my confidence; it has been so empowering,” Warr says. “I went into finance because I wanted financial literacy for myself and others. I never doubted if I had the smarts to do it; I knew I had the drive. But I’m just beginning to understand in depth what really goes into growing funds and making your money work for you.”

Greenleaf Trust, which celebrated 20 years of awarding its scholarship to WMU students in 2019, also offers a graduate associate program for scholars. Those students go through a rigorous interview process and some, like Warr, get offers for full-time positions with the company.

“When I graduate, I will become a wealth management associate,” Warr says. “I love that I’m in a place with individuals who specialize in many different areas. I can walk into the building and there are people who practice law, CPAs and others who have spent their whole lives studying a certain sector of equities, and that is a fountain of knowledge. That is what makes me happy to go to work. I want to help people reach their goals, and I’m building the fundamentals to do that.”

Life will likely not slow down for Warr any time soon. He looks forward to pursuing long-term career goals at Greenleaf Trust, including becoming a business development officer and serving as a mentor to future interns. Until then, he has his sights set on graduation in fall 2020.

“I want my daughter to see me with my degree in hand, and that’s what I value more than anything,” Warr says. “She’s going to have her stumbles and falls in life. I’m still going to hold her in my lap and say, ‘Get up and go do it,’ because life is hard and how you handle it is the only thing that matters.”