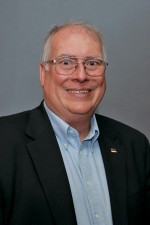 Dr. William Harrison is professor emeritus in the Department of Geological and Environmental Sciences at Western Michigan University.

In his 30 year teaching career, he supervised and served on student committees for over 50 master's and 10 doctoral students. He has published over 35 technical papers on Michigan geology and authored or co-authored over 70 technical presentations at conferences, professional meetings and workshops. Harrison is the director of the Michigan Geological Repository for Research and Education, which he founded in 1982. He is interested in the Michigan basin and preservation of geological data and samples.

In addition to his responsibilities at MGRRE, Harrison is the director of the Michigan Center, Midwest Region and Petroleum Technology Transfer Council. He is a member of the American Association of Petroleum Geologists, the Paleontological Society, the Society for Sedimentary Geology and the Michigan Basin Geological Society. Harrison has proudly served on several AAPG committees such as the Academic Liaison Committee, the Distinguished Lecture Series Committee, the Committee on Meetings, the Cores and Sample Preservation Committee and the Organizing Committee. Further accomplishments include fulfilling several terms in the House of Delegates and serving as president of the Michigan Basin Geological Society. In 2001, Harrison served as general chairman for the Eastern Section AAPG Annual Meeting; he was the co-general chairman in 2010.