Michigan’s non-fuel mineral industries add $2 billion to the state’s economy annually. Resources such as iron, construction and building materials, industrial and metallic minerals can be wisely used only if comprehensive and current data about their quality and distribution is available. That data comes from subsurface rock cores and samples. 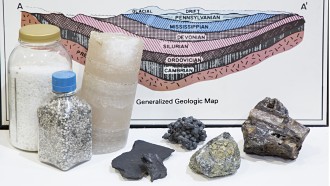 And America’s dependence on foreign sources has increased dramatically. In the 1990’s, America was the world’s top minerals producer and exporter. Now we are the world’s top importer, making us increasingly vulnerable to supply shortages and price volatility.

In a new NPR interview, Stateside discusses Michigan's role in mining these raw materials with Drs. William Harrison and Peter Voice. The interview begins at 18:40 or scroll down the NPR page for a shorter clip.

The Many uses of Core and Sample Data

Some of the cores at the Michigan Geological Repository for Research and Education represent shallow materials, including glacial deposits and bedrock. These were drilled by engineering companies as part of public works projects, by the Michigan Department of Transportation for prior road and bridge work and by MGRRE researchers, such as Dr. Alan E. Kehew. These cores contain materials such as sand, gravel and limestone that are used in road building and construction. Knowing where these valuable deposits are located can help preserve them for future use. Especially in areas of dense population, these materials can no longer be produced because of surface land use.

Most of the cores archived at MGRRE were originally drilled by oil and gas companies from the 1930’s through the 1980’s. Coring is a very expensive technique; however, coring yields the greatest amount of potential data. Remote sensing techniques are more commonly used today, but some newer wells have been cored, largely to provide hands-on examination in new plays. Data from cores outlive their original purpose and can be used to address energy, mineral and environmental questions for this and future generations. As an example, cores archived at MGRRE originally drilled for oil and gas exploration provided the data to assess the quality of a large Michigan potash deposit.

Western Michigan University’s Michigan Geological Repository for Research and Education has been receiving national attention about its work with Michigan Potash Company, the result of which has helped to rediscover a $65 billion dollar deposit here in Michigan. Because the United States imports most of its potash from other countries, our Midwest farmers pay a very high price for their fertilizer. Corn and soybeans require a great deal of the product; Michigan farmers alone use 300,000 tons per year. The cost of potash includes about $40 to $60 per ton for rail transportation alone. A local Michigan source could cut that transportation cost in half by using trucks and barges.

MGRRE is proud to have assisted in this significant rediscovery. This event just shows how important it is to rescue and keep cores: cores are the source of raw data about natural resources that generate new economic development. MGRRE archived the only known cores from this vast potash deposit and provided the source for tests which confirmed its quality as the highest grade available. Dr. William Harrison, MGRRE director, and Linda Harrison, MGRRE administrator, are gearing up to study the potash deposits across the state and hope to provide a step up to an emerging large-scale industrial development.