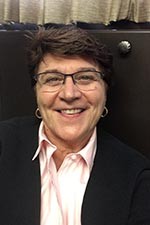 Maria Cristina Fava is an assistant professor of musicology at Western Michigan University. She was born in Riva del Garda, Italy, and attended the Conservatory of Music in Trento, where she graduated with a Bachelor of Music Performance degree (clarinet). In August 2000, after a career in arts management organizing and administering international music events in her native city, she moved to the United States and enrolled in the M.M. program in musicology at Bowling Green State University, where she completed master degrees in music history and ethnomusicology in 2002 and 2004 respectively. In August 2004, Fava enrolled in the Ph.D. program in musicology at the Eastman School of Music, University of Rochester, where she graduated in 2012 with the dissertation, “Music as Political and Social Statement in the 1930s: Marc Blitzstein and Friends in New York City.” Her research has been funded by the Elsa T. Johnson Dissertation Fellowship, the Glenn B. Watkins Travelling Fellowship, and the Dena Epstein Award from the Music Library Association. She is the recipient of the Alfred Mann Dissertation Award from the Eastman School of Music.

Fava’s current musicological research considers the multifaceted social, economic, political, and intellectual contexts of American musical life during the twentieth century, including the intersections of music and politics that characterized the Great Depression Era and the effects of McCarthyism on film music composers. She has presented her work at various national and international conferences, including meetings of the American Musicological Society and the Society for American Music, and published in the Italian musicological journals Musica/Realtà and Musica Docta, as well as in the Journal of the Society for American Music and American Music. Before joining the faculty at WMU, Fava taught at the Eastman School of Music and at Michigan State University.