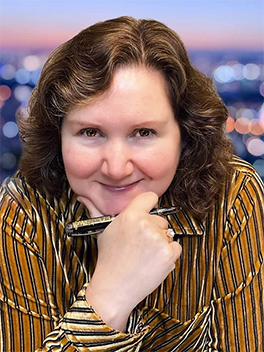 Composer for the 2022 Conference

Julie Ann Giroux was born in Fairhaven, Massachusetts on December 12, 1961. She graduated from Louisiana State University in 1984. She started playing piano at three years of age and began composing at the age of eight, and has been composing ever since. Her first published work for concert band, published by Southern Music Company, was composed at the age of 13.

Giroux began composing commercially in 1984. She was hired by Oscar winning composer Bill Conti as an orchestrator; her first project with Conti being "North & South" the mini-series. With over 100 film, television and video game credits, Giroux collaborated with dozens of film composers, producers, and celebrities including Samuel Goldwyn, Martin Scorsese, Clint Eastwood, Madonna, Liza Minnelli, Celene Dion, Paula Abdul, Michael Jackson, Paul Newman, and Harry Connick Jr., among others. Projects she has worked on have been nominated for Oscars, Emmys, Grammys, and Golden Globe awards. She has won individual Emmy Awards in the field of "Outstanding Individual Achievement in Music Direction." When she won her first Emmy Award, Giroux was the first woman and the youngest person to ever win that award. She has won it three times.

Giroux has also published a large category of classical works with emphasis on original compositions for wind band, which are published by Musica Propria and distributed internationally. She is greatly sought after as a composer and recently completed her fifth symphony, "Sun, Rain & Wind," which premiered in June 2018. Her music has been recorded and reviewed internationally, receiving top reviews, and her music has been performed at major music festivals the world over.

Giroux has been a true force in a male dominated field and has accrued many previously male only awards. She is a member of ASCAP, The Film Musicians Fund, Kappa Kappa Psi, Tau Beta Sigma, and the American Bandmasters Association. She is a recipient of the Distinguished Service to Music Medal Award, Emmy Awards, and was the first female composer inducted into the American Bandmasters Association in 2009.

Western Michigan University is pleased to welcome Julie Giroux as guest composer/conductor for the School of Music's 52nd annual Spring Conference on Wind and Percussion Music.