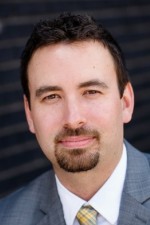 Dr. Trey Harris is the Associate Director of Bands for the School of Music. Dr. Harris began his professional musical career as a trombonist playing in the United States Marine Corps. He served in the III Marine Expeditionary Force Band (Okinawa, Japan) and Marine Forces Reserve Band (New Orleans, LA).  After an honorable discharge from service, he studied music education at Michigan State University, receiving a B.M.E degree.  While working on his degree, Harris maintained an active schedule as a freelance trombonist, private trombone/euphonium teacher, and band director.  Upon graduation, he moved to the Midwest and pursued an M.M. degree at the University of Missouri-Kansas City, Conservatory of Music and Dance.

During his time in Kansas City, Harris consistently performed as a trombonist and conductor, holding the position of 2nd trombone in The Peoples’ Liberation Big Band of Greater Kansas City.  Receiving his M.M. in conducting in 2009 from UMKC, Harris continued his career as a public school band director achieving success with both middle school and high school bands in Missouri and Florida.  In 2017, Harris graduated with his Ph.D. in Music Education from Florida State University.

An advocate for new music, Harris has participated in multiple consortia leading to original compositions for wind band. Most recently, he led a consortium for composer Adam Silverman. This resulted in a new work for upper high school/young college band called Raining Bricks in which Harris conducted the world premiere on April 12, 2018.

Dr. Harris served as Assistant Director of Bands at Kennesaw State University in Kennesaw, GA. In addition to his work with the bands at Kennesaw State, Harris also worked as guest conductor for the Georgia Brass Band during their NABBA Championship concert cycle. He maintains an active schedule as a trombonist, conductor, and clinician.