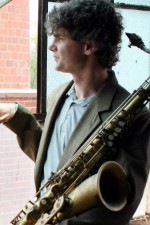 Saxophonist, composer, and Toronto native Andrew Rathbun has achieved a rare depth of lyricism and compositional intelligence in 20-plus years as a recording artist; Ben Ratliff of the New York Times described Rathbun as “an industrious saxophonist and imaginative composer-arranger.” Voted as a “Rising Star” in the 2018 Downbeat Critics Poll, he has documented his stirring original music with a series of 15 acclaimed recordings, on the Challenge, Fresh Sound and Steeplechase labels, and has collaborated with musicians like Kenny Wheeler, Billy Hart, Ben Monder and Luciana Souza . “Rathbun’s lines dance and glide,” writes David Whiteis of JazzTimes, “reflecting both childlike wonder and well-honed artistry.”

After hearing 2014’s Numbers & Letters the New Yorker declared Rathbun “a crafty saxophonist and composer whose ambitious work over the past decade has eluded the wider recognition it deserves.”  Atwood Suites, Rathbun’s JUNO-nominated jazz-orchestra project was summarized in Jazziz Magazine; “On the basis of this CD alone, Rathbun deserves to be ranked among today’s top arranger- composers.” His latest recordings include Impressions of Debussy, about which revered Chicago critic Howard Reich declares "the listener travels from a high-toned performance of a familiar work to a new conception that opens up its motifs, rhythms and harmonies." Northern Noir is Rathbun’s duo recording with the legendary pianist Ran Blake. In James Hale’s review, he describes the recording as “a deeply charming and compelling meeting” and that “he has released some truly moving and memorable recordings.”

Andrew has been a fellow at the MacDowell Colony, the Atlantic Center for the Arts and the Banff Center. He received his masters from New England Conservatory, and his D.M.A from Manhattan School of Music.

A crafty saxophonist and composer whose ambitious work over the past decade has eluded the wider recognition it deserves.
– The New Yorker

Toronto native Andrew Rathbun is one of the most thoughtful and curious saxophonists to emerge in New York over the past decade.
– The Chicago Reader

The Canadian saxophonist/composer is a gifted performer who writes challenging and complex pieces.
– The Irish Times

Andrew Rathbun is an artist who takes chances with his recordings. You don’t hear any paint-by-the-numbers jazz discs from him.
– All About Jazz

The mournful tone and slow quaver he coaxes from the tenor, with a trace of Stan Getz’s irresistible tone, are perfect for the pianist. Rathbun is mostly Ran’s straight man, minding those melodies, though he can also cut across the form with busier lines and still meet up with the pianist on the pivot points. He’s good at getting on Ran’s wavelength, shadowing his swerves.
– Kevin Whitehead, NPR’s Fresh Air Jazz Critic
Facebook Twitter YouTube Instagram
School of Music
Western Michigan University
Kalamazoo MI 49008-5434 USA
(269) 387-4667