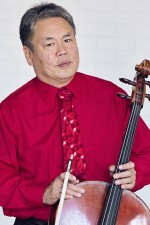 Bruce J. Uchimura is Professor of Music at Western Michigan University where he teaches cello and coaches chamber ensembles. He joined the faculty in the fall of 1987, having taught previously at the Augusta College Center for Creative Arts, Michigan State University, and the Preparatory and Adult Education department of the Cleveland Institute of Music. He served as Principal Cellist of the Augusta (Georgia) Symphony and was the first person ever to be named Associate Conductor of that ensemble.  He served as head of chamber music and member of the cello faculty at the legendary ENCORE School for Strings, under the directorship of David Cerone, from 1985-2007.

Uchimura received the Bachelor of Music degree from The Juilliard School of Music where he studied cello with Leonard Rose and Channing Robbins and chamber music with Felix Galimir and the Juilliard String Quartet. He received the Master of Music degree with an Artists Diploma in Cello from the Cleveland Institute of Music where he studied cello with Alan Harris and chamber music with Koichiro Harada and Bernhard Goldschmidt. He has also studied at the Aspen Music Festival, the Meadowmount School of Music and the Banff School of Fine Arts, and he has held an orchestral fellowship at the Spoleto Festival.

As cellist of the celebrated Merling Trio for 30 years, Uchimura performed in 44 states, Europe, and Canada to broad critical acclaim. The trio performed 30-40 concerts yearly, hosted by presenters such as the Fairmont Chamber Music Society, the Charleston Chamber Music Society, and the Duncan Theater Café Classics Series. With the trio, Uchimura has recorded for the Pamplin, Albany, MSR Classics, and Centaur labels. The Palm Beach Arts Paper said, “He is an excellent cellist, with a large, powerful, beautiful singing tone, and every phrase he played was shaped and molded for profile and sensitivity.”

Uchimura’s leadership as a conductor garnered wide recognition for the Western Michigan University Symphony Orchestra, which was named "Best Classical University Symphony Orchestra" in DownBeat magazine's 2005 national student music awards competition. In 2003, the Kalamazoo Gazette's classical music reviewer picked the orchestra's WMU centennial celebration concert as the most memorable performance of the year. The orchestra performed to much acclaim at the opening concert of the 2008 Michigan Music Conference in Grand Rapids, and has performed on music series around the state, such as the Community Arts Series in Hart, and the South Haven Performance Series.

Current summer festival positions for Uchimura include Cello an American Experience in Minnesota and Aria International Summer Academy in Massachusetts.  Overseas, he has given master classes at the Conservatorio de Las Rosas in Mexico, and the China Conservatory in Beijing. Highly esteemed as a teacher, Mr. Uchimura was named 2010 Educator of the Year by the Michigan String Teachers Association.  He actively supports music education in the state with numerous appearances as clinician and guest conductor, and serves as faculty advisor to the WMU student chapter of the American String Teachers Association, which was named “Best Student Chapter” in 2011. His cello and conducting students hold positions as directors of and performers in orchestras around the world, as well as in chamber ensembles such as the La Catrina String Quartet and the Fry Street Quartet.