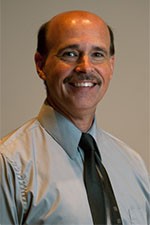 Steve Wolfinbarger, professor of music at Western Michigan University, where he teaches trombone. He earned the Bachelor of Music Education degree from Evangel University in Springfield, Missouri, and the Master of Music and Doctor of Musical Arts degrees in trombone performance from the University of North Texas.

Over the past few years Professor Wolfinbarger has won several major teaching awards, honors and recognitions. He was selected as the Michigan Professor of the Year for 2013 by the Carnegie Foundation for the Advancement of Teaching and the Council for Advancement and Support of Education (CASE) in Washington, D.C (see article). He was also one of 15 nominees statewide for the 2013 Michigan Distinguished Professor of the Year Award. Wolfinbarger was the recipient of the 2010 Western Michigan University Distinguished Teaching Award, the highest award given to any professor at WMU. He was recently selected as the WMU College of Fine Arts Greg Roehrick Distinguished Professor for 2014, and he was also presented with the College of Fine Arts Dean's Teaching Award in 2009. He was the sole recipient of the 2009 International Trombone Association's prestigious ITA Award "in recognition of his distinguished career and in acknowledgement of his impact on the world of trombone performance," the highest prize awarded by the International Trombone Association.

Wolfinbarger has appeared as a guest soloist or clinician at numerous regional, national and international conferences, including the Midwest Trombone Workshop, National Fine Arts Festival, Midwestern Music Conference, the Arizona Low Brass Symposium, several Brazilian National Trombone Symposiums, and the Latin America Trombone Symposium. He has been featured as a guest performer or clinician at major music conservatories in The Netherlands, Finland and Mexico and in the United States at the Chautauqua Institute, The Eastman School of Music and more than 25 colleges and universities. As a member of the Western Brass Quintet, he has performed in Canada, Germany, Russia, and The People's Republic of China.  He has also performed as an extra with the Dallas Symphony Orchestra, and with the Springfield (Missouri) and Kalamazoo Symphony Orchestras.

Students in his studio have competed successfully and have won a number of important competitions. Since 2001 students have been selected as finalists in the various International Trombone Association competitions on 19 occasions (including 18 times in the last 11 years), and they have been selected as winners in their respective competitions six of the past eight years. In addition, they have been invited to compete as semifinalists or finalists at the American Trombone Workshop’s National Solo Competition nine times since 2005. Two separate students have recently been chosen as winner and honorable mention in the Yamaha Young Performing Artists Competition. His students have been selected as finalists in both the Minnesota Orchestra's Steve Zellmer Orchestral Excerpt Competition and the Music Club of Detroit solo competition. Since 2000, graduates of his studio have been admitted to some of the most competitive music programs in the United States, including The Juilliard School, Yale University, The Eastman School of Music, Cleveland Institute of Music, New England Conservatory, Cincinnati Conservatory, Oberlin Conservatory, Northwestern University, University of North Texas, Florida State University and Indiana University, to name a few.