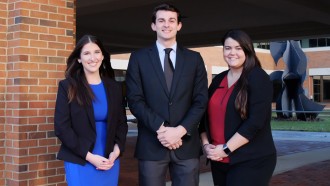 KALAMAZOO, Mich.—A team of two students from Western Michigan University's Haworth College of Business took second place overall at the University of Toledo Invitational Sales Competition. This is the third consecutive year that WMU has landed a spot in the top three. Impressively, the team also placed first in the first-year/sophomore division for the second year.

Sarah Obermeyer, a first-year student from Grand Rapids, placed first in the first-year/sophomore division, winning every round through the tournament. Gabe Pelak, a junior from Mattawan, placed sixth, cementing his place in the finals and making WMU one of only three schools that saw each of their competitors advance to the last round.

Participants were asked to assume the role of a 3M industrial sales specialist selling foil tape to a fictional company, Brentwood Lighting. The competition rounds were progressive, with the team selling to different employees at the lighting company, ranging from the design engineer to the production manager. In order to advance, the team had to finish in the top half of their group. The final round tested the competitors with a surprise scenario and only 30 minutes to perfect their presentation.

Stacy Zoeller, a senior with multiple recent first-place finishes under her own belt, coached the team, working with Obermeyer and Pelak more than six hours per week prior to the competition. The team utilized the innovative technology of the Robert S. Kaiser Sales, Negotiation and Leadership Lab to run through scenarios, ensuring they were ready for anything.

"Seeing all of the hard work Gabe and Sarah put into preparing for the competition and how much they grew and developed as a result was very rewarding," says Zoeller.

The respect is mutual, with both Pelak and Obermeyer crediting their coach's hard work as the foundation of their success.

"Stacy put in as many hours, if not more, than we did to make sure we performed to the highest level we could," said Pelak. "My biggest takeaway from the event is the realization that the reward around the sales program at WMU is real. The success that Sarah and I found can be attributed to the professors and coaches who helped us to the finalist level."

As a first-year student, this experience may have helped Obermeyer find her calling.

"I learned so much from this experience. I was not very knowledgeable about sales at the beginning of this process, so being able to go through this experience so early in my college career was amazing," she says. "Not only did I learn about using my enthusiasm to my advantage, I was also able to network with many employers and students."