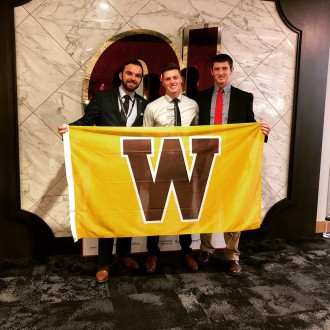 Quicken Loans hosted 21 of the top sales competitors from across the country, representing schools such as Ohio University, Kent State, University of Ohio, Arizona State University and several others. The WMU students competed in three different rounds of competition, going through the full sales cycle that a mortgage banker would experience.

Demas advanced to the final round, where he sold onstage in front of fellow competitors as well as the leaders of Quicken Loans. The pressure was on, but Demas said his preparation in the sales and business marketing program and in the Robert S. Kaiser Sales, Negotiation and Leadership Lab helped him clinch the win.

"I was the last one to compete in the final round and had no idea what my competition had done prior to me," says Demas. "I recall eagerly awaiting the results. I never want to walk into a competition expecting to win, so I was astonished when they announced I had and felt all the preparation had been worth it."

Frost helped secure an invitation for WMU sales and business marketing students to participate in the competition, communicating with recruiters about the standout sales students in the program.

"Even though the Quicken Loans Sales Competition has an inherently individualistic structure, it was exciting to see WMU compete as a team," he says. "We prepared for the competition together, knowing that success for one of us was a win for us all. I am thrilled with Ryan's overall win at this event."