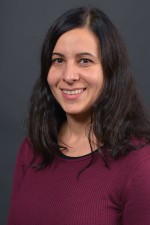 Dr. Mercedes Tubino is an assistant professor of Spanish in the Department of Spanish at Western Michigan University. Originally from Cordoba, Spain, Tubino joined the department in fall 2014.

Tubino's teaching experience is multicultural and varied; she has taught Spanish, English and Spanish linguistics at the University of Arizona; the University of Sonora, Mexico; and the University of Seville, Spain. She has also done research on Amerindian Languages (Uto-Aztecan), which enriches her understanding of Latin culture through language.

Tubino has published a book with John Benjamins, several articles in journals and edited collections, and has more articles in press. Given her leadership role with prominent and well-respected research groups such as the Max Planck Institute for Evolutionary Anthropology (Leipzig, Germany), among others, her scholarly profile adds global prestige to WMU.