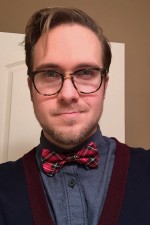 Justin Gibson is an instructor at Western Michigan University that teaches Writing About Art and has also taught Thought & Writing for the Department of English. A cartoonist and writer, his plays The Death of the Comet and How I Was Dishonorably Discharged from the Cub Scouts were both awarded by the Kennedy Center American College Theatre Festival. He was the creator, head writer, and showrunner of a live six episode weekly series entitled Spacecano as part of WMU's New Play Project. He is also the graphic designer for two newspapers in Kalamazoo County. His writing and art is frequently inspired by his interests in absurd comedy, comic books, film, and pop culture ephemera.