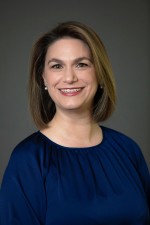 Cynthia Klekar-Cunningham is an associate professor of English at Western Michigan University and is currently serving as the Director of the School of Communication. She joined the faculty in 2005 after receiving her Ph.D. in 18th century literature from West Virginia University.

Klekar-Cunningham has provided leadership in her discipline and at WMU. Klekar-Cunningham served as editor of Comparative Drama (2005-12), scheduling coordinator for the English department (2011-14), chair of the English department Strategic Planning and Assessment Committee (2016-18), and co-chair of the College of Arts and Sciences Women’s Caucus Steering Committee (2014-16). From 2014-19 she was chief negotiator for the WMU chapter of the American Association of University Professors and led the faculty in successful contraction negotiations in 2014 and 2017.

She is the recipient of numerous awards and fellowships, including the American Society for Eighteenth-Century Studies Innovative Course Design Award (2005), the International Education Faculty Development Grant from the Haenicke Institute for Global Education (2006), the Richard H. Popkin Research Fellowship (2007), and the Paula Backscheider Archival Fellowship (2009).