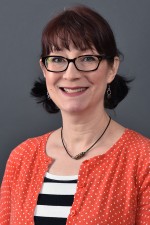 Kelly Wittenberg is an assistant professor in the School of Communication at Western Michigan University. As a filmmaker and media artist, Kelly has taught a wide range of courses in film production, digital video, and interdisciplinary media, including screenwriting, cinematography, and nonlinear editing using both Final Cut Pro and Adobe Premiere systems.

Born in Las Vegas, Kelly grew up on the West Coast, where her father pursued a career in politics at the Nevada State Assembly. As a child Kelly was encouraged to participate in political campaigns through volunteer service, and she credits her father with instilling respect for civic engagement and social justice.

Kelly began her academic career in studio art with an emphasis on photography and video, which fueled her lifelong passion for communication through the means of visual language. Next she studied film production at Syracuse, with electives in computer graphics, video art, and sculpture. Never satisfied to stay put in one medium, her work continues to cross disciplines, with recent emphasis upon collaboration with colleagues in electronic music technology. Her current projects range from documentary and experimental film to traditional photography. When Kelly is not making films she is likely to be found sewing, building something, or repurposing found furniture. Her work has been encouraged by such varied organizations as the Saint Louis International Film Festival, the Association for Independent Film and Video, and the Savannah College of Art and Design. She is an active member of the University Film and Video Association. Visit her professional website here.