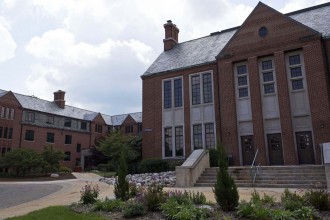 The Medieval Institute at Western Michigan University  ranks among the top ten of the some 90 institutes, centers, and programs focusing on medieval studies in North America. It was established in 1962 as a center for instruction and research in the history and culture of the Middle Ages. Its pioneering function then was to introduce the first Master of Arts in medieval studies offered at a state-supported university in the United States.

Today, nearly six decades later, WMU remains one of the few public institutions in the country with an interdisciplinary M.A. in medieval studies. The degree requirements are intended to provide graduate students with the basic tools and skills necessary for specialized scholarly research as well as with an understanding of and an appreciation for interdisciplinary aspects of the study of medieval culture.

WMU faculty affiliated with the Medieval Institute are drawn from the departments of comparative religion, English, history, Spanish and world languages and literatures in the College of Arts and Sciences; from the Frostic School of Art and the Department of Theatre in the College of Fine Arts; and from the University Libraries.

In addition to administering the graduate program in medieval studies, the Medieval Institute offers an undergraduate minor program, fosters research in all areas of medieval culture and sponsors a publications program for the dissemination of such research.

The institute fosters research through the annual International Congress on Medieval Studies, the Richard Rawlinson Center and the Center for Cistercian and Monastic Studies. Medieval Institute Publications publishes series of books, journals, monographs and critical editions of texts.

The director of the Medieval Institute is Robert F. Berkhofer, associate professor of history.