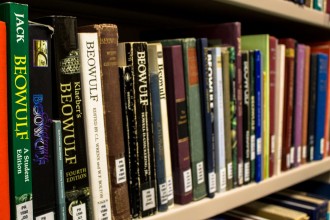 With the support of the College of Arts and Sciences at Western Michigan University, the Richard Rawlinson Center began building its library in 1994, and the holdings of more than 5,000 books, offprints, microforms, video and audio, and data discs have grown over the years through both purchase and donation, including substantial gifts from the Estate of Edward B. Irving, Jr., and from Audrey Ekdahl Davidson, Clifford Davidson, Otto Gründler, Donald G. Scragg, Thomas Seiler, Paul E. Szarmach, and Elizabeth C. Teviotdale, as well as in memory of Larry Syndergaard.

The sheets prepared by Peter Clemoes and Malcolm Godden that record manuscript variants in Ælfric of Eynsham's Catholic Homilies, donated to the library by Godden, are fully digitized and available to the public at on the website of University Libraries. Also included in the collection is a digitized version of WMU’s copy of "A Testimonie of Antiqvitie" of 1566(?), the earliest edition of one of the Catholic Homilies.

In practice, the library serves as:

The library, housed in the Rawlinson Center on the University's East Campus, is open to students and other researchers 9 a.m. to 5 p.m., Monday through Friday, except when University offices are closed.