The Medieval Institute at Western Michigan University was launched as a result of conversations between two faculty members, John Sommerfeldt in history and John McNally in English. After surveying the number of faculty members with expertise in medieval studies, they enlisted colleagues in identifying a core of courses that could be used to support both undergraduate and graduate degree programs in the field. A new master's program in medieval studies was announced in May 1961, and plans were set into motion for an undergraduate minor. In 1962 the program became the Medieval Institute, with Sommerfeldt as its director.

In March 1962, the medieval studies program sponsored a regional conference on medieval studies—an event that would prove decisive for the future of the nascent institute. At first a biennial affair, by 1966 the conference had grown to nearly 200 participants from colleges and universities across the United States and Canada. In 1970 the conference became an annual event and moved from March to May.

One reason for the success of the conference was the central location of Kalamazoo in the United States, but the most important was the egalitarian strategy successfully argued by Sommerfeldt. Invitations to present papers at the Kalamazoo conference went out to everyone in the field, and paper proposals were invited from anyone who wished to be considered. Emerging scholars and graduate students were encouraged to submit paper proposals, and their contributions were by design included among conference sessions. This approach, considered radical at the time, served to open scholarship to a broad range of people, and over the years many young scholars have read their first papers at Kalamazoo. 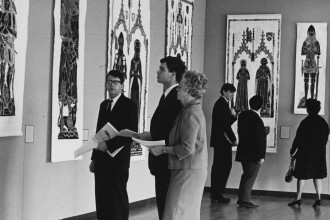 In 1964, the Medieval Institute started publishing the journal "Studies in Medieval Culture," conceived as a vehicle for publishing papers delivered at the conference. The journal was eventually transformed into a series and continues publication to this day. The Early Drama, Art, and Music series was launched in 1977, and Medieval Institute Publications assumed its present structure in the following year, with Thomas H. Seiler as Managing Editor. In the early 1980s, Medieval Institute Publications began its ongoing arrangement to publish titles in the various series of texts and translations sponsored by TEAMS (Teaching Association for Medieval Studies).

The Medieval Academy of America held its 1974 meeting in conjunction with the Medieval Institute's annual May conference, confirming the place of the Kalamazoo conference in the field. The local philanthropist Irving Gilmore gave the financial support that made this joint meeting possible. It was with this ninth conference in 1974 that the number of sessions topped 100. The subsequent growth of the conference in both prestige and size may be traced to the appointment in 1975 of Otto Gründler, first as associate director and then in the following year as Sommerfeldt's successor as the director of the Medieval Institute.

The name of the conference was changed in 1979 to the International Congress on Medieval Studies, a designation that more accurately reflected the scope and ambition of the event, which by that time featured more than 200 sessions. On the occasion of the twentieth anniversary of the first conference on medieval studies, in 1982, the Medieval Academy of America assisted in the celebration by holding its annual meeting once again in conjunction with the congress. Through the 1980s and 1990s and into the twenty-first century, the congress continued to grow, with more than 300 sessions in 1984, more than 400 in 1994, more than 500 in 1998 and more than 600 in 2003. The congress now boasts hundreds of sessions, including sessions of papers, roundtables, panel discussions, workshops, demonstrations and performances. The 2020 congress was canceled as the COVID-19 pandemic gripped the world, and the 2021 and 2022 congresses are being held virtually.

When Cornelius Loew—an early champion of the institute first as dean of the College of Arts and Sciences and then as provost—retired from the University in 1986, the board of the Medieval Institute established a lecture series in his name that brings a distinguished medievalist to the WMU campus each semester.

With a promised gift from Georgian Rawlinson Tashjian and David Reitler Tashjian, the Richard Rawlinson Center was established in 1994 under the aegis of the Medieval Institute. There quickly followed a series of National Endowment for the Humanities summer programs on Anglo-Saxon topics directed or co-directed by Paul E. Szarmach, who succeeded Gründler as the institute's director in 1995. The center began sponsoring speakers and sessions at the congress in 1996 and launched its publication series in 2000. The Paul E. Szarmach Prize for a first article in Anglo-Saxon Studies was first awarded in 2018.

The Otto Gründler Book Prize, established by then WMU president Diether H. Haenicke, for an outstanding book in any field of medieval studies was first awarded at the International Congress on Medieval Studies in 1997, and the Medieval Institute continues to award the prize annually

The Center for Cistercian and Monastic Studies was established in 2010 as a research center under the aegis of the Medieval Institute as the successor to the Institute of Cistercian Studies, which had been founded in 1973 as a cooperative venture between Western Michigan University and Cistercian Publications, Inc.

Medieval Institute Publications publishes monographs, thematic collections, textbooks and reference works addressing the period from late antiquity to early modernity across the globe. Its journals and books are routinely published Open Access. It became a member of the Association of American University Presses (since 2017, the Association of University Presses) in 2011 under Patricia Hollahan, who served as managing editor from 2002 until 2013. She was succeeded by Simon Forde, who served as managing editor and then director and editor-in-chief, from 2015 to 2017. In 2018, Medieval Institute Publications entered into a partnership with De Gruyter, a leading academic publishing house.

The Medieval Institute has partnered with the Department of History to offer a National Endowment for the Humanities summer institute on law and culture in medieval England, to be held virtually in 2021.