Three of the students were also included in the top five finalists in the individual round. Students Stacy Zoeller, Adam Lesniak and Gabe Pelak, finshed first, fourth and fifth place, respectively, at the competition held Oct. 12 in Ann Arbor. 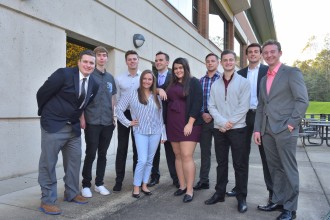 Participants were asked to assume the role of inside sale representatives for Thomson Reuters and follow-up with a potential client interested in WebBuilder CS, a custom website service. In progressive rounds of competition, students had to develop creative and compelling sales messages, all delivered via phone or video, which ultimately led finalists to a call with the final decision maker.

"Our students were determined to perform well at the Thomson Reuters Sales Competition," says Mary Nielsen, instructor of marketing and team coach. "The students spent many hours preparing in the Robert S. Kaiser Sales, Negotiation and Leadership Lab and went into this competition as a true team. The Thomson Reuters' employees were spectacularly welcoming and helpful to all of the competitors. I am so proud of our students who earned the top spot through dedication, preparation and determination."

The competition allowed students to test their skills against top students from neighboring schools. Junior Cooper Frost helped recruit this year’s team, outlined a practice schedule and provided support for all team members as they prepared for the competition.

"I knew preparation would be the key to our success," says Frost. "WMU's win this year excites me. Our students are competitive against those from other top sales programs."

Zoeller, who placed first in the individual round of competition, notes, "One thing I took away from this competition is the value of expecting the unexpected. During the semi-final round, we were thrown a curve ball, speaking to someone different than we had planned. Due to running multiple sales scenarios for this competition, I was able to stay calm and focused."

Teamwork carried the day, according to Zoeller. "I valued that all our team members practiced together," she says. "We also had students of varying experience levels on the team, which allowed some students who are interested in sales but not as seasoned to participate alongside students who have competed before. We are all committed to each other's success, which is what makes the sales program special."

To learn more about the sales program, visit the Department of Marketing online.