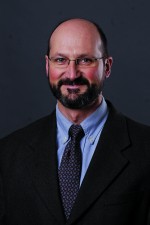 Dr. Pablo Pastrana-Pérez is an associate professor of Spanish medieval literature and historical linguistics in the Department of Spanish at Western Michigan University.

His papers and publications to date have focused on 15th and 16th-century texts, particularly the short chivalric narratives. He is finishing a collaborative research project that began between Pastrana-Pérez and the late Catherine Julien (Department of History). The project, funded by the National Endowment for the Humanities, involves a scholarly edition of 61 documents pertaining to Alvar Núñez Cabeza de Vaca's exploration of the South-American interior between 1540 and 1544.

Pastrana-Pérez is active in the Medieval Institute and serves as the faculty director of the undergraduate study abroad program in Santander, Spain. He is the recipient of a 2016-17 College of Arts and Sciences’ Faculty Achievement Award in Teaching.