In the Department of Geological and Environmental Sciences at Western Michigan University, we are proud of our exceptional graduates and take great joy in learning of their successes. In "Dispatches from the Field," recent graduates are interviewed about their new jobs. Below is a list of recent alumni and where they are now. For more information about our esteemed alumni, check out our Alumni Achievement Award Recipients page. Are you a recent graduate? Keep in touch by filling out our update form.

Dispatches From the Field

Karl Backhaus (M.S. 2018): Karl Backhaus has accepted a position as a Museum Scientist I for the New York State Geological Survey, a research division within the New York State Museum. Karl's job involves creating geologic maps of areas across the State of New York. Mapping involves field work in these areas, drilling to determine what lies below the ground surface and geophysics/lab work to determine what makes up these materials. Read more.

Doug Keto (B.S. 2018): Doug has accepted a full-time Hydrologic Technician position at the U.S. Geological Survey after being nominated for an internship with the USGS through the WMU hydrogeology field course. Doug performs measurements of stage and discharge by applying various methods with different equipment based on field conditions. Doug also installs and maintains a variety of sensing, recording, and communications instrumentation. In addition, Doug records, analyzes, and publishes hydrologic data for surface water and ground water networks for the state of New York. Read more. 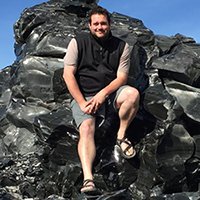 Bryan Currie (M.S. 2016): Bryan Currie's education at WMU involved a strong research relationship with the Michigan Geological Repository for Research and Education. As a result of the hands-on knowledge he gained there, coupled with his experience working directly with local industry, Currie secured a position as a Geologist at Devon Energy in Oklahoma City. Read more.

Richard Dudek (M.A. 2015): Prior to graduation, Richard Dudek accepted a job with the Alaska Forest Service in Juneau as a Geologist/Minerals Administrator. During his interview, he was asked whether he was comfortable flying to work and possibly carrying a rifle to protect himself from bears while on the job. As a veteran of the armed forces, Dudek was uniquely qualified in this regard. Read more. 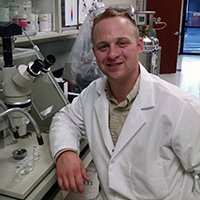 Anthony Boxleiter (M.S. 2015): Before graduating with his M.S. in geosciences in 2015, Anthony Boxleiter had already secured an exciting position in the mining industry as an Analytical Geochemist at Imerys. Read more.