WMU part of $2.3 million program that boosts diversity in economics 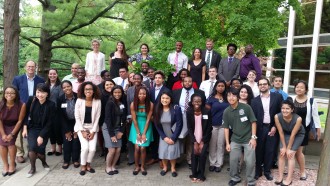 Economists base much of their work on the belief that equal opportunity is vital to how society functions. Yet, the economics profession has faced a persistent lack of women and members of underrepresented racial and ethnic groups.

Addressing this gap is a priority for the Western Michigan University Department of Economics. Since 2016, WMU has partnered with Michigan State University to offer an innovative program designed to increase diversity in economics doctoral degrees and professions.

Funded by more than $2.3 million in grants from the National Science Foundation and other organizations, the summer program has been offered at various universities since 1974, including Yale, Duke and the University of California, Berkeley. The two-month residential program takes place at MSU’s campus in East Lansing and is slated to be hosted by Western and MSU until at least 2020.

“Preparing a diverse pool of students for the rigors of graduate school in economics is an initiative we are proud to support,” says Dr. Christine Moser, WMU professor of economics, who serves as associate director of the summer program. Dr. Don Meyer, WMU Department of Economics chair and professor, also serves as an instructor in the program, with a number of WMU graduate students serving as teaching fellows.

According to Moser, the program accepts about 35 college students, typically juniors or seniors, from around the country. “Most are thinking about graduate school, but some are interested in public policy or other economic professions,” she says. “Some are first-generation college students or come from schools that don’t typically send students on to Ph.D. programs. To mentor and advise these students gives them a great opportunity to move to the next level in their education or careers.”

The summer program aims to boost diversity in the field by offering students substantial preparation for high-level graduate work in economics and related fields. According to the AEA, some 20 percent of all doctorates awarded to minority scholars in economics can be attributed to the summer program.

“The AEA summer program brings together students and teaching fellows from around the country, and gives them the opportunity to network with one another,” says Chikezie Okoli, a WMU doctoral student and teaching fellow for the program in 2017. “The confluence of different viewpoints, backgrounds, experiences and ideas allows students to learn from their peers about issues they may not have been aware of previously. Additionally, students become better researchers because the program gives them the techniques to conduct proper research and the awareness to ask the right questions.”

The application deadline for the 2019 summer program is Jan. 31. Interested students can learn more at the AEA Summer Program website.