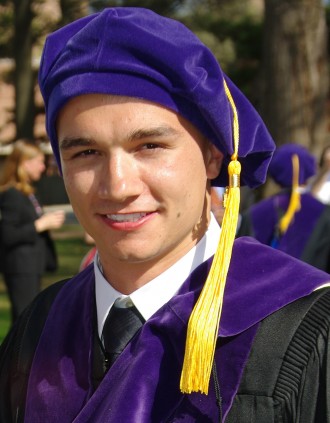 O'Melveny & Myers LLP has a long history of practicing law and has earned a strong reputation in one of the largest economy and leading technology states—California. In November 2014, a Western Michigan University graduate hopes to add to that history as he creates a legacy of his own. Matt Bahleda '11 is a graduate of WMU's College of Arts and Sciences and the Lee Honors College. He graduated summa cum laude and studied political science and philosophy. Bahleda was initially interested in WMU because he wanted to follow in his brother's footsteps, but made the decision to attend because of the wonderful opportunity WMU offered. At WMU he knew he could pursue an education in a great environment with professors that would help him achieve his goals.

Bahleda was accepted to the University of Michigan Law School and received his Juris Doctor degree in May 2014. Throughout law school, he focused heavily on his education and earned a position as an intern for the Department of Justice in Southern California for the summer of 2012. After his positive experiences on the West Coast, he applied strictly to law firms in California and has found a home as an associate with O'Melveny & Myers.

Bahleda credits the faculty and staff of Western Michigan University with making his success a possibility and now, a reality. His professors throughout his time in the College of Arts and Sciences played a crucial role in providing him with the knowledge and skills necessary to succeed. When asked what he would like to share with students looking to follow a similar path, Bahleda suggests getting involved. He advised that students "join the mock trial team and hone your trial and public speaking skills. Pledge a Greek organization and get involved with their many philanthropic outings. Focus on getting the best grades possible and develop strong relationships with your professors, many of whom have extremely helpful advice for how to succeed and want nothing more than to help you reach your goals." Bahleda also shared that when preparing for law school admissions "the LSAT is arguably the most important factor and it's a test that anyone can master with enough time and commitment so start early!" Bahleda recommends that students really enjoy their time at WMU "because there is no place like it and the times and experiences you have there will be a part of your life forever."
Facebook Twitter LinkedIn YouTube Instagram
College of Arts and Sciences
Western Michigan University
Kalamazoo MI 49008-5308 USA
main office: (269) 387-4350
advising office: (269) 387-4366