Seita Scholars receive a little extra during the holidays 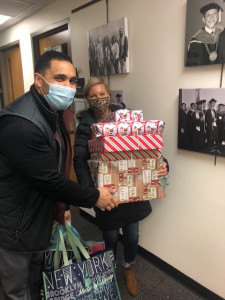 The holidays are usually a time to kick back, relax and spend time with family. For some students at Western Michigan University, family has a drastically different meaning. Growing up, these students were put into the foster care system due to a variety of family reasons, but they worked their way out, eventually pursuing a higher education at WMU and becoming a part of the Seita Scholars Program.

An innovative, comprehensive support program for foster care youth, Seita Scholars accepted its first class in fall 2008. The support system aims to increase successful outcomes among young adults who have aged out of the foster care system in the State of Michigan. Scholars of the program receive a scholarship, year-round on-campus housing and one-on-one campus coaching for academic and personal support throughout their college career.

For another year in a row, these scholars received gifts from WMU’s College of Arts and Sciences. Usually set up as a collection to purchase meals for scholars staying on campus during the winter break, the pandemic put a hinder on having large group meals. This year, the college raised over $2,300 to purchase Meijer, Walmart and Target gift cards for Seita Scholars to use during the winter break.

Expanding on the success of the Seita Scholars Program, WMU established the Center for Fostering Success in 2012. The center conducts research on foster care and higher education, and has trained campus coaches for foster youth in nine states. The center is also the home base for a statewide network—Fostering Success Michigan—that focuses on disseminating best practices and supporting other colleges and universities as they provide opportunities to former foster care youth.

Since accepting its first class of former foster care youth in fall 2008, WMU's Seita Scholars Program has grown into the nation's largest and most comprehensive outreach program for young people who have aged out of foster care. The program is named after Dr. John Seita a three-degree WMU alumnus who is a national advocate for foster care youth and whose personal story inspired program founders.

In 2018, the program and WMU were named the recipient of the Excellence in Innovation Award by the Honor Society of Phi Kappa Phi.