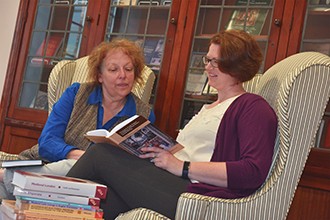 KALAMAZOO, Mich.—A leading academic publishing house has been selected to partner with Medieval Institute Publications, a unit housed within Western Michigan University’s College of Arts and Sciences. An official partnership agreement between MIP and De Gruyter will take effect immediately.

The agreement comes on the heels of recent growth in the number of titles MIP produces in late antiquity, medieval and early modern literature. The partnership will allow MIP to expand its niche publishing market in these areas significantly over the coming years, while also developing new areas of publication.

“We are pleased to enter this new partnership with De Gruyter and look forward to expanding MIP’s international presence,” say Jana Schulman, director of the Medieval Institute, and Theresa Whitaker, co-editor-in-chief of MIP. “The new partnership will allow MIP to continue its mission of promoting humanistic study, inquiry and discourse through an ambitious worldwide publication program.”

The benefits of the new partnership are twofold, with De Gruyter gaining from MIP’s experience and reputation in the field of medieval studies and MIP benefiting from De Gruyter’s extensive global reach and advanced mechanisms for marketing and production. Over the years, MIP has become known for quality publications focusing on what it means to be human through the ages, with particular emphases on literature and literary culture, lived experience, and art, music and drama.

“We are delighted to be able to work with MIP to ensure that valuable content in medieval studies is more broadly accessible to researchers across the globe,” says Tom Clark, vice president, humanities and social sciences at De Gruyter. “With existing De Gruyter medieval studies titles, the partnership will also lead to substantial collection of high-quality content that academics and librarians can find in one place.”

MIP continues to seek submissions from scholars in its existing areas of expertise for consideration of future publication. Additionally, the partnership will allow both organizations to develop new areas of publication, reach new readership and build on WMU’s international reputation for excellence in the humanities.

Medieval Institute Publications assumed its present structure in 1978 as the publishing arm of the Medieval Institute and became a member of the Association of University Presses in 2011. MIP contributes to the research function of the institute by publishing scholarly journals, books for classroom use, and academic books and book series. Those book series include Studies in Medieval and Early Modern Culture; Richard Rawlinson Center Series for Anglo-Saxon Studies; Studies in Iconography: Themes and Variations; and Early Drama, Art and Music. MIP also publishes periodicals as well as materials produced by the Consortium for the Teaching of the Middle Ages.