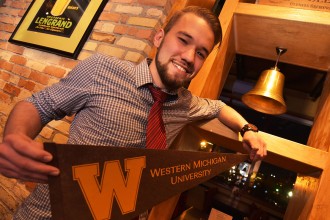 KALAMAZOO, Mich.—With the nation's first higher education program in sustainable brewing in its second year at Western Michigan University and Kalamazoo Valley Community College, area businesses are doing their part to ensure that future brewers have ample opportunity to hone their craft.

At the forefront of that effort is the Kalamazoo Beer Exchange, which awarded its annual Beer Week scholarship for the first time to a Western Michigan University student. The KBE, a bar and restaurant that features local and international beers, presented the scholarship to Dan King, a junior from Bloomingdale pursuing a bachelor's degree through the joint WMU-KVCC sustainable brewing program.

During a presentation event Nov. 17, King was invited to ring the KBE opening bell amidst a crowd of friends, WMU faculty and alumni, and KBE staff and patrons.

"I wasn't expecting a big celebration, but this is really impressive," he said. "It's pretty exciting."

"It's awesome," he said. "When we found out Western and KVCC were starting a brewing program right here in Kalamazoo, we immediately said, 'that's where we want this scholarship to go.'"

Flora said his company established the scholarship fund as part of opening festivities for Kalamazoo Beer Week. Ten percent of KBE's sales from the first night of that week go to the scholarship. Some $1,500 was raised last year, with $1,000 being awarded to King. The company plans to hold the same type of fundraiser during this year's Kalamazoo Beer Week, set for Saturday through Saturday, Jan. 14-21.

"It's the perfect way to kick off Beer Week—celebrating the breweries that really got craft beer going and then giving back to the brewing industry in Michigan," Flora said. "If the scholarship can help a student with books or pay part of their tuition, that's great."

Hands-on experience and internships, as well as an opportunity to understand every aspect of the industry, are major components of the WMU-KVCC sustainable brewing program. Those components have been important to King, who has been employed since March at the Paw Paw Brewing Co., which is co-owned by WMU alumni Ben Fleckenstein and Ryan Sylvester and located just 15 miles from WMU.

As the company's cellarman, he is responsible for taking care of the beer during its fermentation process and assists the brewhouse team with various cellaring, brewing and packaging activities. King said his sustainable brewing education is something he has been able to apply on the job immediately.

"Paw Paw is a very interesting brewing company in that a lot of its equipment is repurposed," he explained. "It's a little bit more sustainable than buying everything brand new, and it makes brewing more interesting because you have to adjust your processes. If something doesn't work, you build new parts."

King, who will finish his bachelor's degree in 2018, added that although he eventually plans to own and operate his own brewery, he hopes to continue his career with Paw Paw Brewing after graduation.

"I really like the people there, and I'm learning a lot," he said.

The WMU and KVCC brewing program was developed by the two schools working in close coordination with the industry. The resulting "two-plus-two" program in sustainable craft brewing offers students the opportunity to earn a certificate or associate degree at KVCC, then move on to a Bachelor of Science degree that marries industry art and science with WMU's national reputation in sustainability.

The rigorous science curriculum addresses some of the industry's most pressing issues. It was developed with input from an external advisory board comprised of a dozen of Michigan's top craft brewers, many of them in West Michigan, which has one of the country's highest per-capita densities of craft brewers.

Nationally, craft beer accounts for nearly 8 percent of beer sales, and the industry is becoming a significant generator of jobs and revenues. Craft brewing contributed $1 billion to the state's economy in 2015, putting Michigan 10th on the list of states in which the industry has the greatest economic impact. Entries into the industry continue, with West Michigan developing a strong reputation for the craft. In 2013, Grand Rapids was named Beer City USA, and Kalamazoo came in second in the international voting.