Passion. Stories. Film. These are the words to describe film studies student Tirrea Billings. Completing her undergrad at Western Michigan University in film, video, and media studies, Billings returned to the University to complete her master's in communications where she will graduate this spring 2020.

“WMU is really where I discovered who I am, who I want to be and my purpose,” says Billings.

As an undergrad at WMU, Billings developed her skills, learning that film and media can be utilized in ways more than for pure entertainment.

“My time as an undergraduate student at WMU is where I really developed my passion for film and storytelling,” says Billings.

Through her mentorships with Dr. Jennifer Machiorlatti and Kelly Wittenberg, professors in the School of Communication, she pushed the envelope on what it means to tell a story.

“Their mentorship really pushed me to create films,” says Billings. “They both have motivated me to not only be an artist, but to use my art and passion for social justice-oriented media in a way that can shape policy and culture by aiming to create better messages and engaging stories that can shift public opinion, help build a participatory (political) culture, advocate for civic and social action, and transform the public.”

After earning her undergraduate degree, it was hard to find a job in her field. Billings began freelancing, picking up gigs where she could. Eventually clienteles starting coming in more regularly, leading to the development of her company. With the help of her partner, Monte Jones, they created what was first For The Culture Films, eventually changing to Reflct Media Group this past year.

“Reflct Media is a docu-style storytelling company that highlights personal narratives, social issues and underrepresented voices in marginalized communities,” says Billings. “We aim to tell compelling stories that inspire our audience to think deeply about issues and experiences that impact the lives of human beings.” 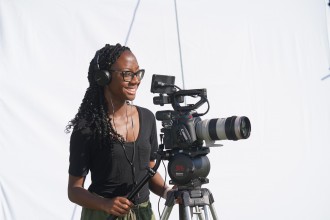 Her partner, Jones, manages the back-end, focusing on contracts, website management, invoicing and music composition. Billings handles the creative work, preproduction, filming, editing, and so forth. Emma France, a film, video, and media studies major at WMU, works as their production assistant.

Through her company, Billings has created two documentary films, “Painting Dreams: The Story of Johnson Simon” and “Toward a Futureland.”

“We believe that all people through all walks of life deserve a platform to tell their story, and we work to ensure that humans who have been marginalized and silenced are heard,” says Billings.

The films follow the lives of individuals not confined to the stereotypical average person. By combining documentary-style storytelling with a social justice framework, Billings and her team work to make the stories, experiences and truth come to live.

“Over the course of my film journey, I have been able to combine my interest in storytelling with social justice by telling stories and advocating for change in areas such as food insecurity, accessibility for people who are disabled, racial justice, and body awareness/healing, child/maternity health, and more,” says Billings.

“I never really go into a project with a strictly set plan,” says Billings. “I have directional ideas and question prompts, but overall, I usually let the story tell itself and edit together pieces based on what I got from interviews.” 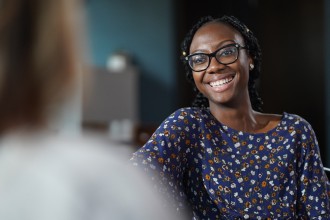 The stories Billings tell are difficult, stemming from complex issues that people are going through.

Reflecting on one of her call-to-action videos about the Bronson Park Freedom Encampment, Billings switched to her listening side, hearing every word the Kalamazoo residents had to say. Approaching the storytelling in an authenticate way, her video told the story of homeless pregnant women, children, infants, people with disabilities, seniors and veterans with no place to go.

“It was heartbreaking hearing their stories. Yet, it was necessary to tell in order to spread awareness of the issue.”

“It’s never about me and my perspective. It’s about the people and their lived experiences,” Billings says. “I’m just the filmmaker that puts it all together.”

looking towards the future 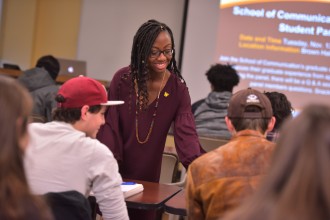 After finishing her master’s, Billings plans on focusing on herself and her company.

“I plan on taking a gap year to focus on the direction I want to take my company, applying to film fellowships that have an emphasis on social justice storytelling, and continuing to work at the Kalamazoo College Arcus Center for Social Justice Leadership as the communications manager,” says Billings.

Not straying away from academia, she plans on applying for doctoral programs in communication with a concentration in media and culture. Applying her academics and work experience, her end goal is to be a creative or executive director of a documentary production company while continuing her work through Reflct Media and teaching communications at a college level. Creating a culture of storytelling and social justice, Billing hopes to keep impacting individuals for years to come.

“Go confidently in the direction of [your] dreams, be passion-driven and stay the course even when things become challenging,” says Billings.