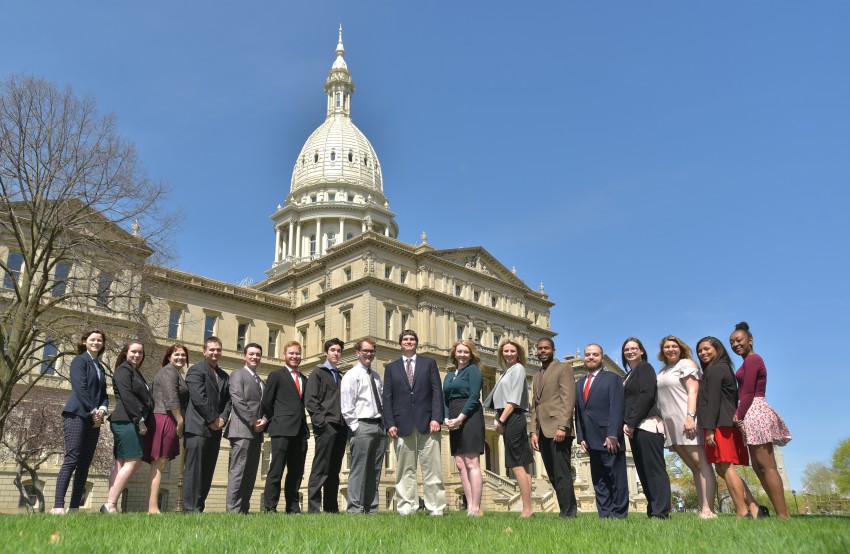 Dr. David Houghton, political science professor, has a list he’s been keeping for four decades. It's filled with nearly 1,000 names–many of them belonging to prominent figures in government, law and business.

Though they specialize in areas as diverse as policy making, intelligence and social service, these individuals have at least one thing in common. They are all WMU alumni or current students who have participated in the Department of Political Science’s renowned internship program.

“I’ve got 988 names,” says Houghton, who implemented the program and has served as its sole director over the years. “I never would have dreamed these numbers would reach that high. We started in 1978 with just a couple of interns in Kalamazoo Township.”

A longtime political science faculty member, Houghton has always been an advocate of experiential learning. Early in his teaching career at Western, he saw the value of giving students the opportunity to experience the inner workings of a government office firsthand. After arranging those first few internships in Kalamazoo, his network of professional contacts seeking interns began to grow.

“I read the paper all the time,” Houghton says. “Any time there was a new city manager or township director, or a new judge elected, I would call them cold to see if they would be willing to take an intern from Western. “Then people started calling me, saying they wanted interns,” Houghton explains. “So it worked out nicely. There’s a huge variety of places to work, depending on a student’s career interests.”

Houghton has since helped students find placement in local government offices and organizations, as well as in Lansing and Washington, D.C.

The Capital Internship Program, as the Lansing cohort is known, accounts for 413 of those 988 internships and is co-sponsored by the Lee Honors College. Twice a week, students assigned to state representatives, senators, lobbyists and various officials travel to Lansing, where they attend session meetings, help research and draft legislation, and work directly with constituents.

"The experience," Houghton says, "prepares them for their future careers more than anything can. They get to see how an office works, but the big thing is self-confidence,” he says. “A lot of students start off and they’re intimidated like crazy – everyone’s wearing a suit, everyone knows exactly where they’re going. By the time the internship is finished, the students feel like they can walk in and interview for a job and they have a lot more accomplished.”

Jessica Brockopp, a 2017 graduate, felt like she got “the experience of a lifetime” when she interned with Senator Hoon-Yung Hopgood during her last semester at Western.

The political science major enjoyed the fast-paced, constantly changing environment and the opportunities it provided her. “The internship really shed light on the things I’d like to do in my career,” Brockopp says. “The legislative process is hard to put into words. You have to kind of live it to understand it.”

A large part of Brockopp’s responsibilities included applying knowledge from her WMU policy courses to research. During her internship, she contributed to a recycling initiative that she expects will become drafted legislation in the near future.

“We evaluated where Michigan stands and how well we’ve implemented policy with the governor’s recycling council,” she says. “We also looked at other states that have successful policies to see if their implementations are feasible for Michigan.”

Brockopp, who plans to run for office one day, says building her network of professional contacts has also been an invaluable part of the internship experience. And according to Houghton, “Communication is what it’s all about.”

In fact, as any former intern knows, participants of the program stay connected long after their years as students. Many of them return to campus to share their success stories, provide career advice or even hire an intern of their own. “About a quarter of all the internships set up are with former interns,” Houghton says. “Nothing beats working with a former intern.”

Brockopp and her classmates had the opportunity to learn from one of Houghton’s most memorable mentees this past spring. Dan Witt (B.B.A.’83, M.B.A.’84), president of International Tax and Investment Center in Washington, D.C., imparted several words of advice to the students during a visit to campus in April.

“A lot of internships can lead to first full-time employment positions,” Witt says. “As good as you may be for any job, you may have three or four people you’re competing with. So it’s important to think about ways to differentiate yourself from your competitors.”

As a student, Witt interned for State Representative Howard Wolpe and as business manager of the Western Herald. He says the real-world experience, combined with a liberal arts background and strong work ethic, is what often sets Western students apart from their contemporaries.

“With internships, a lot of it is coming in with a curious mind, taking what you’ve learned in textbooks and understanding how it works in real life,” Witt says. “You’re seeing and contributing to the bigger picture, and that is greatly appreciated and valued by managers.”

As Houghton’s list nears 1,000 interns, he has one significant hope. To see the program continue long into the future. “Lee Honors College is very supportive of the program and so is Political Science,” he says. “When I am no longer doing this, I hope to relinquish all of my contacts so someone doesn’t have to start cold.”

When that day comes, Houghton says he can rest easy knowing his network of interns will continue to support the program and one another.

“The biggest reward has been getting to know the students,” Houghton says. “Around Christmas time we get a lot of mail and email, and my wife has gotten to know some of them. Dan Witt is like a member of the family. It’s neat to see how many interns got a career out of it.”

Note: Since this story was written in spring 2017, the Political Science and Capital Internship Program in the College of Arts and Sciences at Western Michigan University has accepted more than 1,000 students.