As a geologist, Dr. Roger Steininger, B.S.’64, is one who naturally gravitates toward exploration and discovery. That innate curiosity began when he was a boy growing up in Detroit with a fascination for rocks and minerals. It followed him on family trips to the iron and copper mines of Michigan’s Upper Peninsula, and to the great geologic features of the western United States. It brought him to Kalamazoo and Western Michigan University’s geology program, where he would meet Dr. Lloyd Schmaltz, his lifelong mentor and friend. Eventually, it led him to discover one of the largest gold deposits in the state of Nevada – the 20 million – ounce Pipeline mine.

And although his geological detective skills have led him to unearth some of the world’s most significant gold and mineral discoveries, for Steininger, the real fortune of his work is being able to do what he loves. “It’s just the fascination of learning about the earth – how it’s formed and how it’s made up,” he says. “I’m the guy with the pickaxe, wandering the hills with a computer and a lot of chemical assistance. That’s pretty much what my job has been, is finding areas that are prospective for gold deposits and doing the initial work to prove there’s something there.” 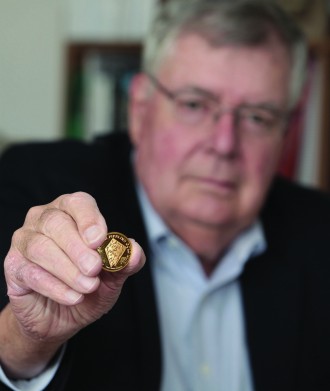 Steininger holds a gold coin made from one of his most significant discoveries, the 20-million-ounce Pipeline deposit. It is one of the largest gold deposits in the state of Nevada.

Steininger, who now lives in Reno, Nevada, and is a semi-retired geological consultant, has had an extraordinary career in economic geology. Having been part of the Nevada gold rush “since the get-go” in the early 1980s, his primary focus has been in gold exploration and development in the West.

“Nevada is the fourth largest gold producing region in the world,” Steininger says. “So, in 1987 I decided to form my own consulting business.” He has since been credited with discovering the Pipeline and Long Valley gold deposits, as well as participating in the discovery or expansion of gold reserves at numerous mining operations.

Along the way, he has found great reward in the economic impact of his work, as well as helping new geologists develop their skills. “For every mining job that’s developed, there are two or three side jobs that are created,” he says. Referring to the Pipeline, he states, “It’s a big mine that created a lot of good paying jobs for a lot of people. It created a lot of tax revenue for the state and federal government, and a fair amount of economic wealth for people and the country in general. That gives me a lot of satisfaction.”

Steininger loves the challenge of examining a piece of ground that might contain a mineral deposit. He uses his skills in geology and geochemistry to identify areas where precious metals hide and works with mining and exploration companies to develop those deposits.

Although Steininger has always been fueled by his curiosity and intuition for discovering minerals and precious metals, he says the foundation for his success is the “fundamental geological education” he received at WMU. “The thing I liked about Western was it was a nice, friendly school that gave me a solid, broad education outside of my major,” he says.

It was Schmaltz in particular who introduced Steininger to the University and encouraged him to follow his passion. Now a professor emeritus, Schmaltz was just beginning to form the geology department in the early 1960s when Steininger transferred to WMU from Wayne State. “Western was the place where I grew to be a better student and a lot of that was Lloyd’s doing,” Steininger says. “He pushed me when I needed to be pushed and got me going in the right direction.”

After graduation, Steininger went on to Brigham Young University where he would meet his wife, LuAnne. He worked as a lab instructor, with ambitions of eventually becoming a college professor. “I got a good education with lots of time in the field banging on rocks in Utah and Nevada,” he says.

After Steininger earned his master’s degree, he and LuAnne move to Pennsylvania where he began a doctoral program in theoretical geochemistry at Penn State University. “A year into it I realized, this is not me,” he says. “I really wanted to be out banging on those rocks, so we left Penn State and moved to Colorado, where I took a job with a company called Climax Molybdenum.”

Steininger spent 15 years working at the company’s mine and at their corporate office in Denver. He traveled extensively through North America, working on molybdenum deposits, an alloy mineral for steel, while raising two children with LuAnne. He also completed his doctorate at Colorado State University at that time. 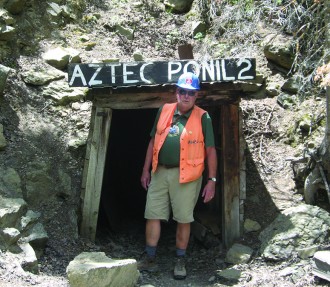 Steininger at the Aztec mine in New Mexico.

In 1981, Steininger decided it was time to move on from Climax Molybdenum. He took a position as western U.S. exploration manager for BP Minerals’ Amselco division in Reno, which introduced him to the Nevada gold business. From there, he formed his consulting business and has since advised many mining and exploration companies in the industry. In 2009, he co-founded NuLegacy Gold Corporation, which led to the discovery of the Iceberg gold deposit in Nevada.

Because of his significant professional contributions to the mining industry and to geological education, Steininger received the WMU College of Arts and Sciences’ Alumni Achievement Award in 2018. This year during Homecoming and Family Weekend in October, he will be recognized with the University’s Distinguished Alumni Award. It is the highest honor WMU confers on graduates.

Even now in retirement, Steininger’s fascination with treasures beneath the ground still fuels his geological scholarship. He is currently writing a number of scientific papers, as well as a book about the history of mining. And, he continues to venture out with his pickaxe once in a while. “It’s been an interesting, challenging and fun career,” he says. “I attribute a lot of that to the education I received at Western, and to the teaching and leadership of Dr. Lloyd Schmaltz.” 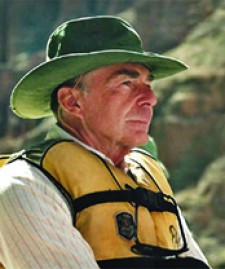 Roger Steininger’s many achievements unearthing mineral deposits started with a solid geological foundation from professor emeritus Lloyd Schmaltz and others in the WMU Department of Geological and Environmental Sciences.

Because of Schmaltz’s influence and his own outstanding experiences at WMU, Roger and his wife LuAnne established a scholarship for a junior or senior who is passionate about geology and wants to pursue a career in the mining industry. The Steiningers provided a $125,000 endowment that will allow the University to award a $5,000 annual scholarship in perpetuity.

“Thanks to this gift, many deserving students will be given exceptional educational and research opportunities with faculty in our department,” says Dr. Mohamed Sultan, chair and professor of geological and environmental sciences. “Additionally, the scholarship will help Dr. Schmaltz’s outstanding teaching legacy continue for years to come. The department and University are very grateful to the Steiningers for their longtime support – they are a tremendous asset to our program and students.”

View this story and more in the 2019 issue of WMU's Arts and Sciences Magazine.